The University of Guelph is home to two Indigenous athletics camps, the first camps of their kind, with U of G varsity athletes playing a key role. 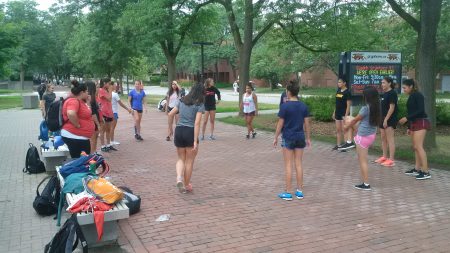 Indigenous teenagers from across Ontario are visiting U of G Aug. 14 to 18 for the Indigenous Leadership and Sport Camp.

The leadership camp was funded by the province as a pilot program and includes a number of sessions on campus. Working with the Aboriginal Sport and Wellness Council of Ontario, the teenagers are participating in a number of events including rock climbing, safety training, and resume and cover letter writing workshops.

The camp is designed to help teenagers hone their leadership skills, learn how to build community programs and network with real-world funders to help launch youth-led programs.

The hockey camp attracted 31 male and female players, with some driving 22 hours from northern Ontario to take part. They did on-ice work, video sessions, strength and conditioning training, and mental toughness sessions with U of G coaches.

“We believe this hockey camp is the first of its kind and was a legacy project from the recently completed North American Indigenous Games, also held at U of G,” said Scott McRoberts, U of G athletics director.

“As part of these camps, our Indigenous varsity athletes and students from campus have acted as chaperones and mentors throughout the week. That has been a big part of the success of the programs.”