A University of Guelph Alumni Association advancement manager has received a provincial award for his efforts to end sexual violence and harassment against women. 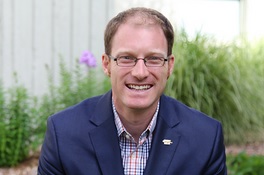 Chris Moulton was announced July 4 as a recipient of the provincial Draw-The-Line Post-Secondary Sexual Violence Prevention Award for summer 2017.

The awards are presented by White Ribbon, a group dedicated to ending violence against women and girls while promoting gender equity and healthy relationships, and the Ontario Ministry of the Status of Women.

Moulton was recognized for his work with Guelph’s Men Against Violence Against Women (MAVAW). Along with the U of G Department of Athletics, he arranged a White Ribbon event including a guest speaker at a Gryphon basketball game.

“It’s important for men to take a stand,” he said.

“Men are the primary perpetrators of violence against women, so it’s our job to help change the culture. A lot of these programs are led by females, and our group’s thought was that a group of men talking to other men would be a way of addressing challenges.”

Moulton has spent 10 years coaching sports teams, and has worked with female students who were victims of violence. That experience led him to look for a way to make a difference.

“I would also frequently sit down with parents and young female student athletes and tell them that U of G is a safe campus, something I believe to be true,” he said.

“I have a duty to contribute to ensuring that continues to be the case. Also, I am the father of two little girls and quite simply I want them to grow up in a society where they are safe.”

Established in 1991, White Ribbon encourages men to pledge not to commit, condone or remain silent about violence against women and girls. Chapters exist in more than 60 countries.