A University of Guelph graduate student has become the first competitor in the national 3-Minute Thesis contest to win both the annual competition’s top prize and its People’s Choice Award.

Plant agriculture master’s student Shanthanu Krishnakumar was announced today as the winner of both categories by the Canadian Association of Graduate Studies (CAGS). He will speak at the CAGS annual conference in Quebec City in November, and will receive $1,500 for winning the top prize and $500 for taking the People’s Choice Award.

The competition, now in its fifth year, requires students to explain their work and its relevance within three minutes using only one slide.

Krishnakumar discussed how to lengthen the shelf life of fruit using hexanal — a natural plant-derived compound — sprayed on nectarines. He explained the process and its potential benefits for food security, particularly in developing countries.

Presentations at earlier regional competitions were recorded and posted online. A three-member panel judged the presentations, while more than 6,000 votes were cast for the People’s Choice Award.

“He was able to connect with his audience about why they should care and how his research will affect the lives of farmers and consumers around the world,” said contest judge Rob Baker, guitarist with the Canadian rock band The Tragically Hip. “Experiencing his enthusiasm encouraged the audience to follow him through the science.” 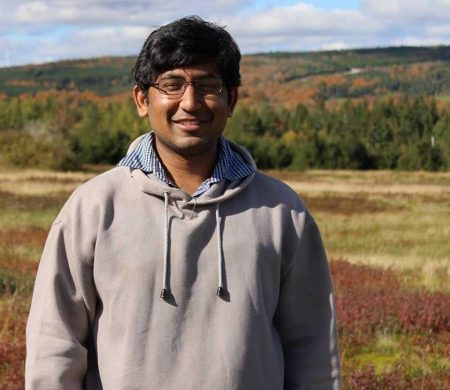 Krishnakumar said that when he learned of his wins, “I almost couldn’t believe it; I called my family in India and my thesis supervisors to tell the news.

“I had just entered the contest thinking it would be nice to win my college competition and make it to the U of G finals. I didn’t expect to win there and go to the provincial event, let alone make it to nationals.”

The win demonstrates the quality of Krishnakumar’s research supervision and his passion for sharing his work, said Ben Bradshaw, assistant vice-president (graduate studies).

“U of G is delighted but not surprised by Shanthanu’s double selection at the national 3MT,” said Bradshaw.

“He embraced the purpose of the exercise, which is to share research with the world in a way that is accessible and fun, and yet also impactful.”

Krishnakumar said he’s grateful for the support of U of G community members.

“I had so many people watch my presentation and provide feedback on how to improve it,” he said.

“This research could help reduce food waste and also be beneficial to farmers and consumers. Farmers can have more time to sell their produce, while consumers get a better product. It’s a win-win situation.”

Krishnakumar said his thesis supervisors, Profs. Jay Subramanian and Al Sullivan, connected him with growers and enabled him to conduct field trials, quality analyses and subsequent molecular work. They also helped him with his presentation by providing useful suggestions.

He had learned of the contest a year earlier but needed to further develop his thesis before entering.

“You learn how to present your research in a way the general public can understand. I’ll be better prepared to discuss why my research can make a difference in the lives of farmers and consumers.”