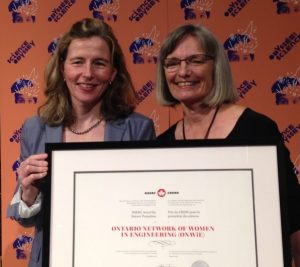 A provincial outreach organization begun by a University of Guelph engineering professor has received the Natural Sciences and Engineering Research Council of Canada Award for Science Promotion.

Professor emerita Val Davidson, School of Engineering, accepted the award in May on behalf of the Ontario Network of Women in Engineering (ONWiE), a group of Ontario engineering schools that aims to increase women’s participation in engineering.

Also in Ottawa to accept the award along with Davidson was Mary Wells, ONWie chair and an engineering professor at the University of Waterloo.

Davidson held the NSERC Chair for Women in Science and Engineering for Ontario from 2003 to 2011.

Since she launched ONWiE in 2005, the number of female students in the province taking grade 12 physics – a prerequisite for engineering – has increased by 21 per cent.

Over the same period, the number of young women in Ontario applying to engineering programs has almost tripled, and women now make up 21 per cent of the province’s undergraduate engineering students.

In 2016, Davidson received the Citizenship Medal from the Ontario Professional Engineers and the Leading Women, Leading Girls, Building Communities Award from the Ontario Women’s Directorate .