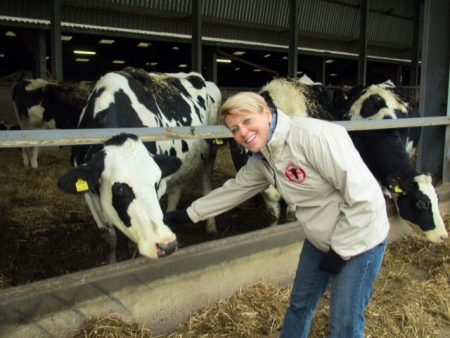 A University of Guelph professor has won a prestigious 2017 Governor General’s Award for Innovation, it was announced today.

Bonnie Mallard, a professor in the Department of Pathobiology, will receive one of six awards to be presented by Governor General David Johnston May 23 at Rideau Hall in Ottawa. Johnston congratulated Mallard and other award recipients  via Facebook messenger.

Created in 2016, the awards celebrate groundbreaking research that enhances quality of life for Canadians.

“This is a wonderful and immensely deserved honour for Professor Mallard,” said Malcolm Campbell, vice-president (research).

“Professor Mallard’s work epitomizes our approach to research at the University of Guelph: making cutting-edge, fundamental discoveries and creating innovations that improve life and livelihoods. This award also underscores the leading role that U of G research continues to play in powering agri-food innovation in Canada — a role that we have played for almost 150 years.”

“It is a real honour to have been nominated and I feel very privileged to have won,” said Mallard.

She worked with colleagues in U of G’s Ontario Veterinary College and the Ontario Agricultural College’s Centre for Genetic Improvement of Livestock, and with researchers from across Canada.

The patented HIR™ technology allows breeders to identify and breed cows with better immunity to disease, especially mastitis, metritis and pneumonia. These diseases cost livestock producers millions of dollars every year, and are the primary cause of antibiotic use.

Between 20 and 30 per cent of variation in immune response stems from inherited factors rather than from husbandry practices such as housing or nutrition, Mallard said. “The advantage of the inherited factor is that these genes can be identified and used to select future offspring with more robust immunity.”

She worked with companies including Semex Canada to create a test for routine use on Canadian dairy farms. HIR™ genetics are now available globally, and a test is also under investigation for swine, horses and other species.

“More sustainable agriculture, increased food security: it’s all about making this a better planet not only for animals but for consumers.”