The University of Guelph’s leadership in energy conservation and sustainability was recognized today by the provincial government.

Glenn Thibeault, Ontario’s minister of energy, and Liz Sandals, MPP for Guelph, toured U of G’s novel thermal energy storage facility and delivered a $5.8-million energy-saving incentive to the University.

“Congratulations to the University of Guelph for being a leader in energy innovation,” Thibeault said. 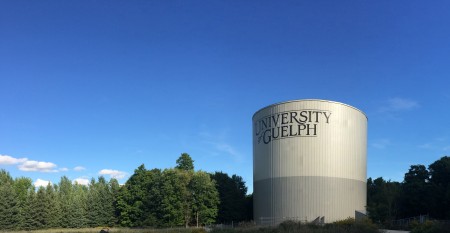 “Energy conservation remains one of the best ways for families, businesses and institutions to reduce their electricity costs. I’m happy to see communities like Guelph celebrating initiatives like this one that will contribute to Ontario’s green energy future.”

Provided under the provincial Save On Energy program, the funding rewards projects that reduce energy consumption. The program is run through Guelph Hydro by the Independent Electricity System Operator, which is overseen by the Ministry of Energy.

The University will use the funds to offset construction costs of its $15-million thermal energy storage system, the only one of its kind in Ontario.

Since becoming operational this past summer, the facility has reduced the University’s energy bill by about $2.5 million, in addition to supporting Ontario’s goal of a cleaner and more renewable energy supply.

“The University of Guelph is committed to an energy future that is sustainable and reliable,” said president Franco Vaccarino.

He said finding innovative ways to use and manage energy and water – with support from programs such as Save on Energy –  is fundamental to the University’s goal of improved efficiency. 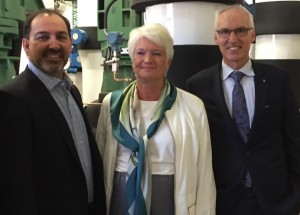 “It’s a win-win for the University and the province. We reduce energy use and costs, which helps our bottom line. The province lowers daytime electricity use and reduces dependency on power plants and imported electricity,” Vaccarino said.

“But the most important winner is the environment, as using less energy preserves natural resources and cuts down on pollution.”

Sandals added: “The University of Guelph is an excellent example ‎of an institution that has taken advantage of our Save on Energy Program to construct a thermal energy system, cut their electricity use and protect our environment.”

The thermal energy storage system works like a giant battery. The system chills water at night when energy costs are lower, reducing demands on the provincial power grid.

Chilled water is piped to the central utilities plant to cool University facilities during warm daytime hours, and is returned to a giant water tank for nighttime cooling. The 30-metre-tall tank holds 22 million litres of water.

“It allows us to avoid running our chilling system during expensive, high-use daytime hours,” said Dan MacLachlan, acting associate vice-president of Physical Resources. He said the tank will pay for itself in energy savings within about five years.

The thermal energy storage system was a major project of the University’s Green Gryphon Initiative, which funds campus-wide energy and water conservation projects.

The $26.2-million plan is funded by the University and by the Student Energy Retrofit Fund, approved in a student referendum in 2008.

In addition, in recent years the University has invested more than $10 million in retrofit programs, energy-efficient lights and windows, heat-recovery systems and water conservation.