Two University of Guelph innovations, a vaccine and a compostable coffee pod, received Innovation of the Year Awards at this year’s Gryphons LAAIR event.

Two U of G research teams received the inaugural award after tying for top spot. The awards will be presented each year at the Gryphon’s LAAIR (Learning to Accelerated Adoption of Innovative Research), a Dragon’s Den-style event where faculty pitch for funding to commercialize their research.

The innovations selected this year were a carbohydrate vaccine for Clostridium difficile (C. difficile) by a team led by Prof. Mario Monteiro, Department of Chemistry; and a fully compostable single-serve coffee chaff-based resin by a team led by engineering and plant agriculture professor Amar Mohanty. 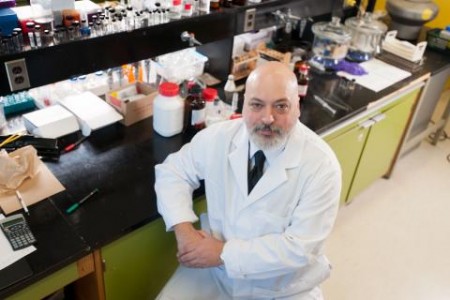 “Each of these research teams are making a transformative difference to the lives of people,” said Campbell. “Prof. Monteiro’s research led to the world’s first glycoconjugate vaccine that may be capable of controlling both infection and colonization levels from C. difficile. Prof. Mohanty’s research will lead to a significant reduction in waste in our landfills.”

C. difficile infections cause severe diarrhea that can lead to life-threatening inflammations of the colon. Though primarily a threat to older adults, they are becoming more common among younger individuals.

Previous vaccines, which cost billions to create, produced antibodies against exotoxins, but do not kill the bacteria or control the colonization in the host.

Monteiro and his team created a carbohydrate-based vaccine that targets the surface polysaccharides exposed by C. difficile.

“It’s very satisfying that what you do with your hands, and with chemistry, can have a positive impact for global health,” said Monteiro.

The second award was for an innovation focused on single-serve coffee pods and the challenge this means for cities and landfills, since these pods can’t be composted. 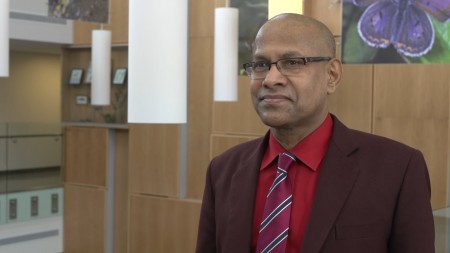 Mohanty and his team at the Bioproducts Discovery and Development Centre (BDDC) worked to create a 100 per cent-compostable resin used to make the component that holds together single-serve soft pods for coffee and other hot beverages.

Their innovation took less than 18 months to create from innovation to commercialization, with the product already in Canadian grocery stores.

“We’re focused on supporting the development and growth of the bio-based economy, and it’s gratifying when an innovation is able to go to market so quickly,” said Mohanty, director of the BDDC.