Finding rare and endangered plants in Ontario may become easier thanks to a study from a University of Guelph researcher.

Jenny McCune, a post-doctoral researcher in the Department of Integrative Biology, has used a computer model that would allow researchers to predict where rare plants may be growing.

The model analyzes local factors affecting plant growth, such as climate, soil type, growing season, geology and topography. It then suggests which plants are most likely to be found in a given area. 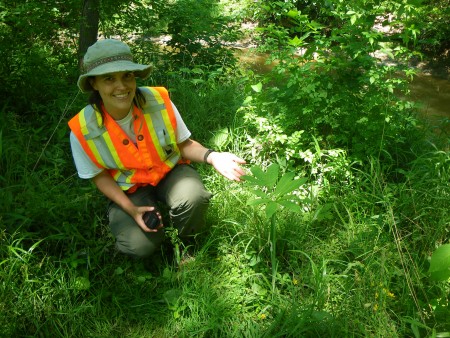 “Ontario is huge and there are vast areas that haven’t been surveyed by botanists, especially when it comes to private property. Many landowners aren’t familiar with rare plants,” said McCune, holder of a Liber Ero Post-Doctoral Fellowship. The Canada-wide fellowship program supports research for biological conservation.

“It can be very expensive to search large areas of forest for rare plants. There are not enough botanists or money. But this computer model could help us pinpoint where we should look.”

Starting with eight rare species, she entered details from known growing areas into the model. The model then highlighted other areas with similar conditions.

To determine whether the model worked, she had to get into the field.

“We went to people’s homes and asked them if we could explore their property, telling them what we were looking for,” she said.

“The vast majority were glad to let us take a look. Many farmers own large parcels of property and don’t know all the plants that are growing in their woodlots. After we finished our survey, we sent them a list of all the plants we found growing on their property.”

Once, she crossed a stream on the hunt for the green dragon plant. She found a patch of the plant, proving that the model worked.

The researchers found the model had a 12- to 30-per-cent success rate, considered high for finding rare plants.

“The model was effective, but no model is perfect. For example, seeds can only travel so far; so even if conditions are ideal, we may not find the rare plant if the patch of forest is too far from a seed source,” McCune said.

“Even so, the model should allow scientists to more easily locate rare plants. It’s a way to prioritize certain locations when we’re looking for a rare species.”

The study is published in the June 21 issue of the Journal of Applied Ecology.