“Guelph-iness” and caring have earned a U of G faculty member and an undergraduate student this year’s William Winegard Exemplary Volunteer Involvement Awards.

The awards were presented to environmental sciences professor Jon Warland and Jordynn Klein, a third-year arts and sciences student minoring in biology, ethics, and family and child studies, during a ceremony March 30 at the McLaughlin Library. 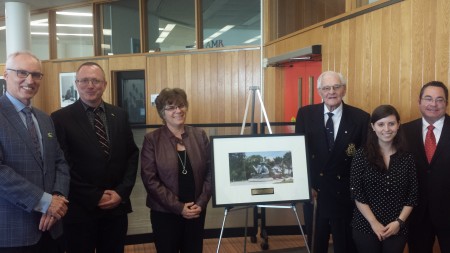 Referring to ongoing discussions about the University’s strategic renewal process with campus and community members, president Franco Vaccarino said, “Connection with others and commitment and engagement are themes that come up again and again.”

Using the term “Guelph-iness” to describe that community commitment to volunteerism, he said caring and achievement go together in Guelph. “That volunteer spirit is connected at the hip with the spirit of excellence.”

The awards are named for William Winegard, former U of G president and former Guelph MP who served as Canada’s first minister of science and as parliamentary secretary to the minister of international trade.

Discussing his own commitment to volunteerism, including serving as a reading buddy for local elementary schoolchildren, Winegard said, “It does so much good for you and for me.”

The annual awards were established in 2007 to recognize the volunteer involvement of U of G members.

He developed and implemented an online database system that enables the unit to track event coverage and training hours. The system has helped the unit with monthly reporting and with preparing annual reports for the provincial council.

Warland has received a 2,500-hour certificate from St. John Ambulance.

A Guelph PhD graduate, he joined the faculty in 1999 and is now director of the School of Environmental Sciences. 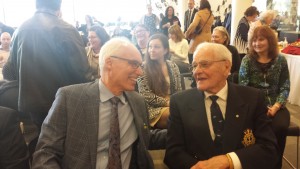 Klein began volunteering during her second week at U of G, including helping to repair boardwalks during Project Serve Day. She has contributed nearly 2,200 volunteer hours during the past 2 ½ years.

Currently a peer helper with the Wellness Education Centre, she belongs to the University’s 1-in-5 Mental Health Awareness Group and co-chairs the Student Wellness Advisory Committee.

Klein volunteers with the emergency department at the Guelph General Hospital and serves as an online crisis responder.

This summer, she will volunteer with the 2016 Special Olympics provincial spring games.

She also volunteers as a research assistant with the Department of Human Health and Nutritional Sciences, and created the Guelph Bioethics Club.

“Professor Warland and Jordynn have shown how volunteers can turn their passions into lasting contributions benefiting people and organizations in our community,” said Christine Oldfield, executive director of the Volunteer Centre of Guelph-Wellington.