New research from the University of Guelph on the brain and memory could help in developing therapies for people
with schizophrenia and Alzheimer’s disease. 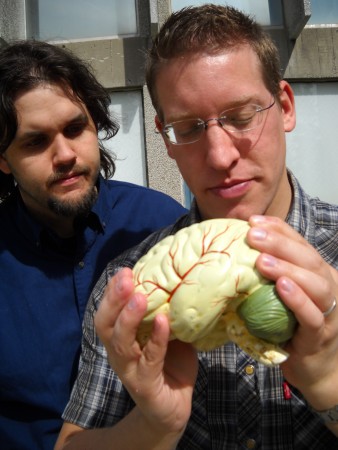 Boyer Winters holds a model of the human brain

The study by psychology professor Boyer Winters and his research team was published recently in the Journal of Neuroscience.

Their work sheds new light on the internal workings of the brain, specifically regions involved in recognizing
and remembering objects.

“Our study suggests that past experience with an object alters the brain circuitry responsible for object recognition,” said Winters.

“It has significant implications for our understanding of multisensory information processing.”

Multisensory integration is an important part of memory, Winters said. For example, if you hold something while blindfolded, chances are you can recognize it by touch if you have seen it before. But how?

Specialized areas of the brain mediate information for sight and touch, Winters said. Some researchers say those regions “talk” to each other, enabling better recognition of an object.

Others believe that the brain integrates information from the senses and stores it in a separate place entirely, and then taps into that area to aid object recognition.

Winters and his team from U of G’s Collaborative Neuroscience Program used rats to test which model is correct.

They let some rats briefly see and touch an object. The next day, the researchers showed the object to the same animals, and compared their responses to those of rats seeing the object for the first time.

Rats exploring a new object appeared to use multiple specialized brain regions to recognize it; rats with previous exposure tapped into a separate part of their brains to perform the same memory task.

“Knowing what an object looks like enables them to assimilate information in a way that doesn’t happen when there is no pre-exposure,” Winters said.

“Our study suggests there is an assigned region of the brain for memory based on previous experience with objects.”

The more exposure to an object, the more information about it is stored in dedicated parts of the brain, leading to more efficient behavioural responses, Winters said.

The research may help in developing therapies for people with dementia and other brain disorders who cannot recognize highly familiar objects or people, he said.