On hot, humid days, you might jump into water to cool down, but for the tiny mangrove rivulus fish, cooling down means jumping out of water, according to a new study from the University of Guelph.

In the study published today in the journal Biology Letters, the researchers describe how these fish air-chill themselves on solid ground in order to drop their body temperatures. The researchers also found that fish exposed to higher temperatures for a week tolerated warmer water better.

The fish jump out of the water to escape rising temperatures, said integrative biology professor Pat Wright, senior author of the study.

“If the fish are prevented from jumping out of the water, they would die,” she said.

“The water evaporates off the fish and they cool down their body temperatures slightly. It only takes about a couple seconds for the fish to start to cool down.” 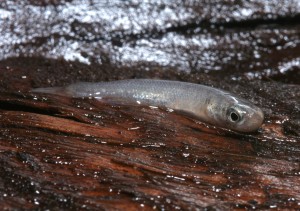 The rivulus fish live in waters from Florida to Brazil, where water temperatures can reach 38 C. (Normal human body temperature is 37 C.)

The researchers, led by undergraduate students Dan Gibson and Emma Sylvester, filmed the fish with a camera that measures body temperature. As the water warmed, the fish flung themselves out and onto damp filter paper, where they cooled down almost immediately. They found that after one minute, the body temperatures of the fish actually dropped below that of the filter paper.

“Based on physics, we would expect evaporative cooling to happen, but this is the first time it was directly measured,” said Wright.

Wright said the fish wriggle to a chosen spot once on land and even find their way by barriers.

“These fish will also jump out because of conflict with other rivulus fish or looking for food, but the primary reason is to cool their bodies down,” said Wright.

“As climate change continues, and temperatures in their habitats continue to increase, we could potentially see them jumping more.”

The research team also looked at plasticity, or the ability of the fish to adjust to higher temperatures.

“Plasticity would help them cope, allowing them to stay in higher temperatures longer.”

The paper is titled “Out of the frying pan into the air: Emersion behaviour and evaporative heat loss in an amphibious mangrove fish.”