A University of Guelph professor has won an international award recognizing leadership in animal welfare.

The award recognizes exceptional achievements and contributions to the advancement of animal welfare.

Mason, a professor in the Department of Animal and Poultry Science, is the second U of G professor to win the honour. Retired professor Ian Duncan, a pioneer in the field of animal welfare, received the inaugural award in 2011. 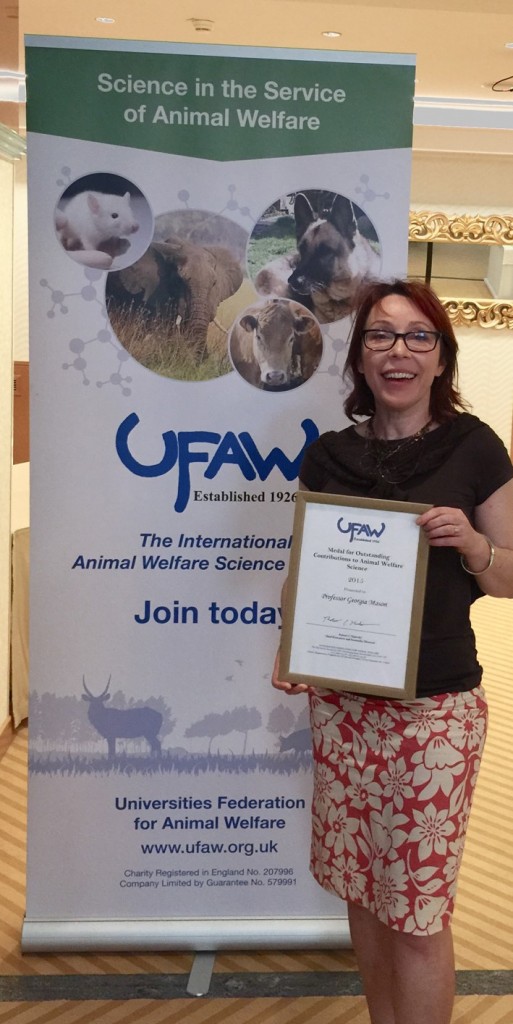 Mason was recognized at the federation’s recent international symposium in Zagreb, Croatia, which attracted several hundred delegates from around the world.

“I am really pleased and honoured to receive this award from an organization that I admire,” Mason said. “It’s also nice to follow in the footsteps of our own Ian Duncan.”

Mason was honoured for her groundbreaking research across a range of species; for increasing understanding of the relationships between animal husbandry and animal welfare; and for being a role model and mentor to the next generation of animal welfare scientists.

She is widely recognized as a world authority on stereotypic behaviour (repetitive or ritualistic movements such as body rocking), and was the first to use a multi-species, comparative approach to addressing animal welfare questions.

Her early research focused on mink motivation, and she has continued to work with mink farmers on improving animal welfare. Her research promoted change in Canada’s animal care codes for this species/on fur farms.

Mason came to U of G from the University of Oxford in England. Her research has appeared in many publications including Nature and Science.

In 2005, she was one of two people worldwide to receive the inaugural Johns Hopkins/Charles River Laboratories Excellence in Refinement Award, which recognizes outstanding commitment to improving the care and housing of laboratory animals.