Story by Portia Kalun, a U of G student writer with SPARK (Students Promoting Awareness of Research Knowledge) 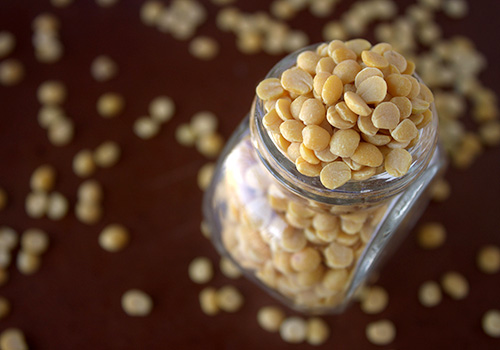 Diabetics and others concerned about spikes in their blood sugar levels have a new reason to love lentils.

University of Guelph and Guelph Food Research Centre scientists investigating the effects of Canadian-grown lentils on blood sugar levels in healthy adults are finding that lentils reduce the spike in blood sugar following a meal.

“For someone with impaired glucose tolerance, such as a person at risk for diabetes or someone affected by diabetes, that’s really important,” says Dan Ramdath of the Guelph Food Research Centre, who is conducting the research with Prof. Alison Duncan, Human Health and Nutritional Sciences.

Consuming carbohydrate-rich foods, such as white bread or white rice, causes a spike in blood sugar when the carbohydrates are broken down. To remove the sugar from the blood, the body releases insulin. Too many large spikes in glucose and then insulin can increase risk of type 2 diabetes — cells stop responding to consistently high levels of insulin, so sugar from the blood is not removed as efficiently, resulting in type 2 diabetes.

But for reasons still not fully understood by researchers, lentils don’t cause that same spike. Including lentils in one’s diet could attenuate the increase in blood sugar following meals and would not require as much insulin, reducing the risk for type 2 diabetes. Lentil consumption would also be beneficial for those who are already diabetic, as they are more resistant to the effects of insulin.

Lentils are readily available to Canadians, and Canada is the world’s largest producer for the export market, but domestic consumption is low. To improve lentils’ public profile and increase Canadians’ consumption, researchers are studying health benefits.

Researchers say this study will determine whether replacing half a serving of white rice or potatoes with lentils will significantly decrease blood sugar levels. To increase the applicability of the study to Canadians, green and red lentils are being tested, both of which are commonly available in Canadian supermarkets.