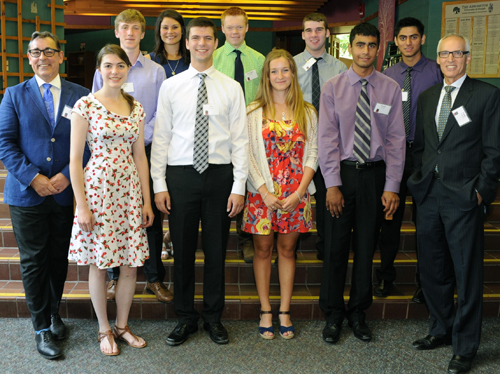 In recognition of their achievements, demonstrated leadership and contributions to their communities, nine first-year U of G students were presented with Chancellors’ and President’s Scholarships earlier this year. These awards are U of G’s most prestigious scholarships, providing recipients with $26,000 each over four years and a summer research assistantship after their first year of study for an additional $6,000. Recipients are also teamed with a faculty mentor from their chosen discipline.

Eric Boucher was presented with a David Mirvish Chancellor’s Scholarship in recognition of his hard work and determination to help others. He enjoys dance and volleyball, as well as volunteering with MADD and the local food bank. Boucher represented his local school board on We Day, planning events and advisory meetings. This very successful student took his desire to help others to a new level as a volunteer on a Me to We trip to Ghana with the goal of helping the global community. This scholarship was created to honour U of G chancellor David Mirvish, a theatre promoter and supporter of the arts, and recognizes Boucher’s interest in dance and his contributions to the community.

Kush Patel was one of two recipients this year of the Lincoln Alexander Chancellor’s Scholarship, which is presented in honour of the late Lincoln Alexander, who was U of G’s chancellor for 15 years. The scholarship is intended to enhance student diversity on campus. In addition to having an excellent academic record, Patel has demonstrated superior leadership skills through his work with the Health Action Team, the Cardiac Rehab Team at the Rouge Valley Hospital and as student council president. Patel implemented several initiatives that fostered significant community engagement. He also teaches at the UCMAS Mental Math School and volunteers at the Cyber Robotics Academy, helping young children become engaged in learning.

A second Lincoln Alexander Chancellor’s Scholarship was awarded to Simrun Chahal, who has actively fought against social injustice and racial discrimination in his community. Chahal was president of the Regional Multicultural Youth Council and was youth representative on his city’s Hate Awareness Campaign. These two efforts, plus his commitment to counsel and support victims, helped combat bullying and discrimination. Chahal has excelled as a student athlete. While maintaining his excellent academic standing in the International Baccalaureate Program, he participated in varsity basketball and volleyball. He was also active in school clubs such as Doctors Without Borders and Student Crimestoppers.

President’s Scholarships were awarded to six students this year. The recipients not only shine academically but also demonstrate leadership and a desire to contribute to the community.

Helen Toner excelled in the accelerated and enriched educational program she enrolled in, but did not let that keep her from being involved in extra-curricular activities. Toner was a successful member of the school debate team and school clubs focused on social justice, equity and politics. She’s also an accomplished dancer and musical theatre performer, who volunteers at her local dance academy by assisting with classes and helping to raise funds.

Celeste Noble has become a national-level Nordic skier, despite the added challenge of exercise-induced asthma. As student council president at her high school, Noble reformed the school’s constitution to provide a more inclusive and welcoming environment for all students. She plays several musical instruments and has been a peer tutor in math, chemistry, biology, English and French. She also works as a ski coach and mentor.

Curtis Kelly has been actively involved in the YMCA Strong Kids Campaign and has volunteered in the intensive care unit and emergency room at Joseph Brant Hospital. As a member of the executive on his school’s student council, Kelly spearheaded several campaigns to raise funds for organizations such as Free the Children, the Halton Learning Foundation and lupus research. He has also been a youth volleyball coach, helping younger students learn the techniques of the sport.

Peter Quosai’s academic success and his volunteer work are equally impressive: He has worked with the Global Outreach Environmental Club, the Community Environmental Leadership Club and the Headwaters program to develop and teach programs about nature and protecting the environment. For three years, Quosai led his school’s cross-country team to award-winning results.

Samantha Pascoal is committed to social justice and helping those in need. She volunteers with St. Paul’s Catholic Church, helping children who belong to the church to better understand their faith and to inspire them to help others. She has also volunteered in Jamaica to build homes, teach literacy and care for the abandoned elderly population in Kingston. As a member of the student executive at her school, Pascoal has attended the Youth Poverty Challenge and served as a ThinkFast retreat leader, motivating students to assert themselves and become leaders in society.

Emmett Swanton has raised and trained his own cattle for the past eight years, getting involved in local agricultural events as well as participating in the annual Royal Agricultural Winter Fair in Toronto. Swanton initiated a “Farmer’s Day” at his school to encourage students to celebrate the community’s agricultural heritage. As student council president he demonstrated superior leadership skills and was an excellent role model for current and incoming students. As a member of the Link Leader program he helped incoming students make the transition from elementary to secondary school.