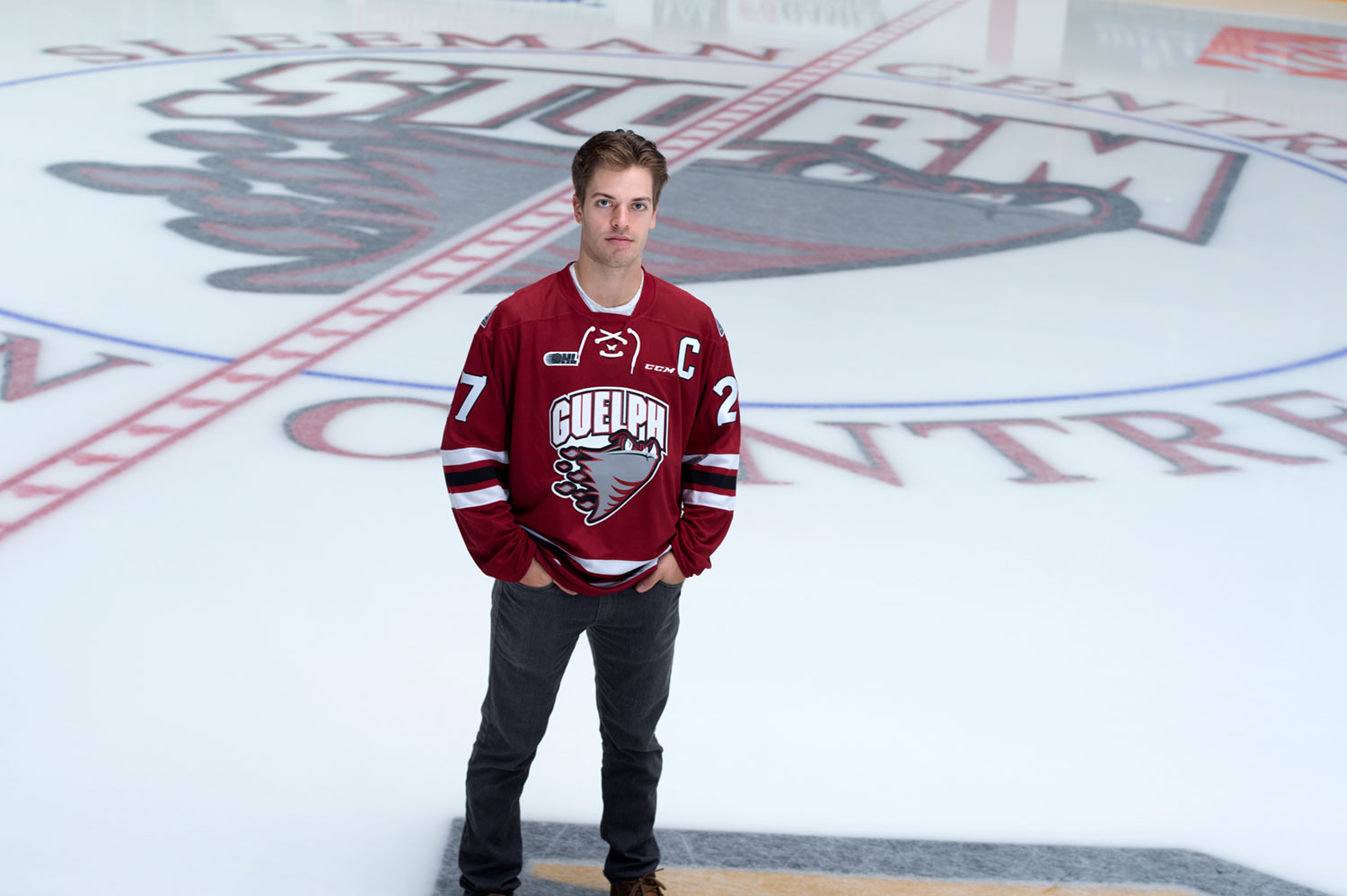 He was already stickhandling roles as full-time captain of the Guelph Storm hockey team and part-time economics student at the University of Guelph. Now Garrett McFadden is devoting some time to a new campaign intended to encourage young athletes to talk about mental health issues. It’s an initiative rooted in his brush with a teenage hockey player who took his own life several years ago.

“It’s important to make sure they know they have people to talk to and tools out there to help them,” says McFadden, speaking rink-side on campus before a Storm practice at the Sleeman Centre downtown.

Besides sharing information, he’s raising funds for the local branch of the Canadian Mental Health Association (CMHA) and for Wes for Youth, an online counselling and resource site for people with mental health issues. Jamie and Yolanda Cameron in Walkerton, Ont., established the program after their son Wes died by suicide at age 16.

That was just over five years ago, but the memory is still raw for McFadden, 19.

McFadden grew up in Kincardine, Ont., where he started playing organized hockey at age four. He and Cameron played in the Grey Bruce Highlanders minor hockey league, where they faced off against each other a few times.

Before Cameron’s death, McFadden knew nothing about mental health issues. Since then, he’s learned plenty about the topic – and about dealing with some of life’s ups and downs.

Drafted by the Storm at age 16, he moved to Guelph in 2014. That year, the team won the OHL championship, although rookie No. 27 saw little ice time.

He missed much of the next season due to injuries. Last year, the team won only 13 games all year. Watching teammates’ reactions and behaviour as assistant captain during that bruising season, McFadden found himself learning about motivation, handling emotions and team play.

This year, the Storm defender was named captain. With a young team battling inconsistencies on the ice this season, that role has involved plenty of discussion with teammates, both collectively and one-on-one.

Thinking about their struggles last year made McFadden think about Wes Cameron. When Stephanie Coratti, the Storm’s community relations coordinator, met with a few team members this past spring to discuss community engagement, McFadden broached his idea.

Under the new program, McFadden visits minor hockey teams around Guelph for hour-long talks. Since early October, he has spoken to about eight teams of players aged 12 and 13. Typically he speaks to about 20 people at a time, although one session drew close to 50 people, including parents.

In his talk, he discusses the 2011 incident as well as struggles since then on and off the ice. Also part of the program is Jessica Schumacher, youth engagement facilitator with the CMHA in Guelph.

She provides information about teen suicide and mental health, including signs of stress, coping strategies and where to go for help. Schumacher says McFadden’s combination of youthfulness and his status as a major junior player make him a role model for younger players, as well as a good foil for her own presentation.

“Garrett getting up to tell a story shows huge strength,” says Schumacher, who runs a CMHA peer suicide prevention and health promotion program in local high schools. “It also shows his vulnerable side, dealing with the loss of someone he knows.

“He’s able to talk on their level. It’s awesome to see someone they admire and look up to affected by mental health issues and still press on.”

That’s especially important for young athletes who often feel compelled to keep quiet about problems, she says. “You need to be strong, you’re not allowed to show emotion, you’re supposed to keep things inside. It’s really important to reduce the stigma.”

McFadden allows that he was nervous about talking to kids about mental health. “What if I don’t make an impact?” he thought. “That’s what frightens me.” He need not have worried.

Attending the talks, Coratti watches listeners’ reactions to gauge how they’re feeling. “A few kids were barely blinking. They were just eyes on Garrett — full attention.”

Coratti, BA ’15, started with the Storm as an intern while studying English at Guelph. Today she helps to book McFadden’s sessions and to talk up the project on social media. “If he can see that he’s helped one kid, that’s a success to him.”

This fall, McFadden has given two to three talks a month — about as much as his hockey and school schedule will allow. He’s taking two courses this semester on campus.

He’s had support from Storm teammates as well as U of G varsity athletes, who have bought his McFadden’s Movement wristbands and shared his project on social media.

Under a suicide prevention and intervention program called Talk Today, the CMHA works with the Guelph Storm and all OHL teams to support players, coaches and staff, and provide training to recognize warning signs for people at risk of suicide.

Signs that someone may be struggling

Suicide is one of the leading causes of premature death in Canada, and is the second leading cause of death among people ages 15 to 24, according to the Waterloo Region Suicide Prevention Council.

Jessica Schumacher with the Guelph chapter of the Canadian Mental Health Association, shares signs that someone may be dealing with a mental health problem: