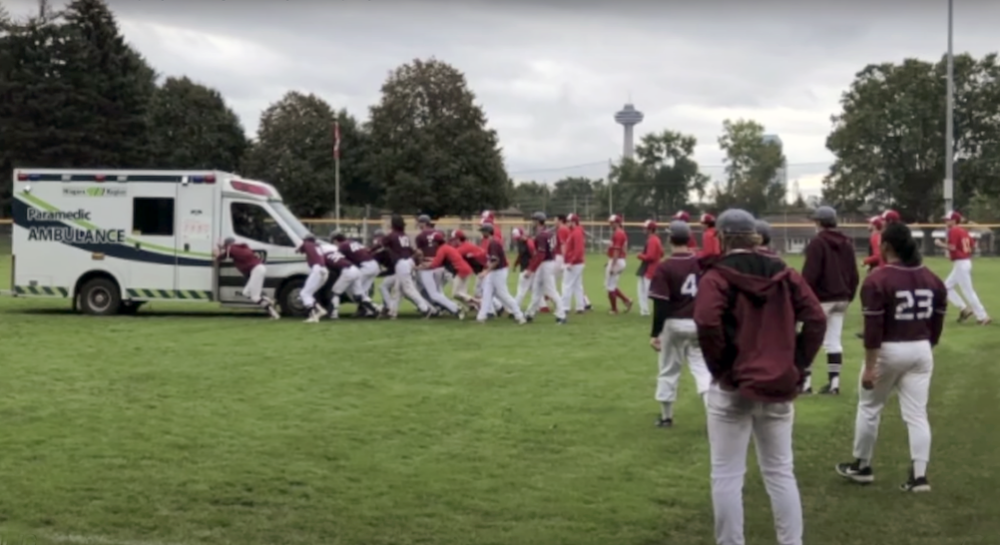 A moment of disaster that ended with University of Guelph Gryphons baseball players stepping up to help their rivals was featured over the weekend on CHCH News.

The Gryphons were facing off against the McMaster Marauders for a crucial semi-finals playoff game in Niagara Falls when a dive to catch a routine flyball resulted in one of the Marauder outfielders crashing headfirst into his teammate’s knee, leaving both badly injured.

Coaches and staff on both teams leapt to help, including a Gryphons assistant coach who is a firefighter and a photographer who is a paramedic. An ambulance was called and the players were lifted onto stretchers.

But as the ambulance attempted to leave, the vehicle became stuck with wheels spinning in the rain-soaked field. The teams put their rivalry aside to work together to push the vehicle out of the mud — a moment that a witness captured on camera and shared on social media.

McMaster head coach Adam Strongman told CHCH News it was a touching moment to witness the two teams working together to help.

“That picture, it means the world,” he said, choking back tears.

The Gryphons ended the game with an 8-10 loss and have been eliminated from their OUA regional qualifier.