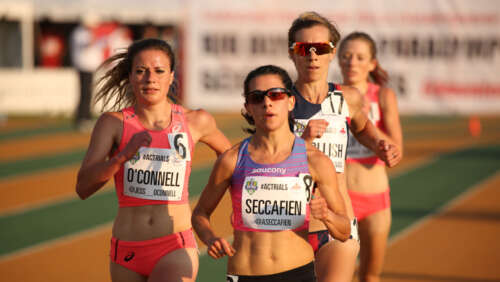 Andrea Seccafien, former Gryphon cross-country runner and track and field athlete, grabbed the 15th and final qualifying spot in the women’s 5,000 metres by just 38-100ths of a second.

Seccafien said her goals for the Olympics are “to be as competitive as possible on the day and give myself the best opportunity to show how fit I am.”

In order to prepare for the heat in Tokyo, Seccafien trained in Hawaii in the weeks leading up to the Olympics.

Seccafien graduated from the University of Guelph in 2013 with a bachelor of arts in international development studies.

“I really loved the international development degree at the University of Guelph,” she said. “I did a specialization in political science and economics, which was a great mix of subjects. I did an independent research study in my last year with a great professor that was really a highlight of my degree.”

She hopes to attend law school after retiring from athletics.

Seccafien made her Olympic debut at Rio 2016, where she was the top Canadian in the 5,000m event.

The 31-year-old is currently the Canadian recordholder for the 10,000 metre and the half-marathon, and lives and trains in Melbourne, Australia.

“I haven’t been back to Guelph since the summer of 2019 unfortunately, and I don’t know when the next time I’ll be home is. I really do miss Guelph, it’s a wonderful place to train and live so I hope the pandemic permits that travel soon.”