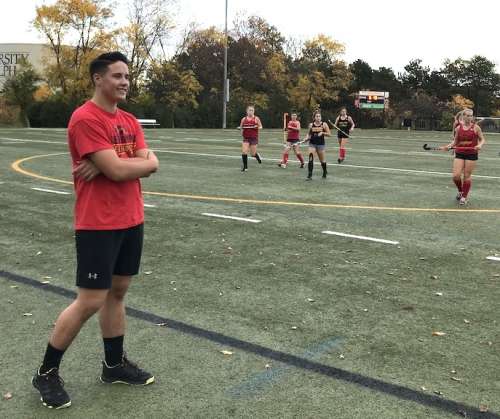 Oliver Lane’s decision to attend the University of Guelph led to great discoveries. Its inclusive community and its supportive people encouraged him to be his true self.

Lane, a member of the Gryphons field hockey team throughout much of his studies on campus, had long felt he was not the gender he had been assigned at birth. At U of G, he learned what it meant to be transgender and found the courage and the encouragement to begin his gender transition.

“At university, I discovered new passions, new interests and new friend groups, all broadening my perspective and horizons,” said Lane, who was a star player on the field hockey pitch. His transition began during his third year with the team and came with some tough decisions.

He loved the team and loved competing. He worried that his teammates – the people he was closest to and spent so much time with – would think differently of him when he transitioned. He was saddened to think he would no longer be a part of the team. But the love and support he received from teammates and U of G Athletics put him more at ease. 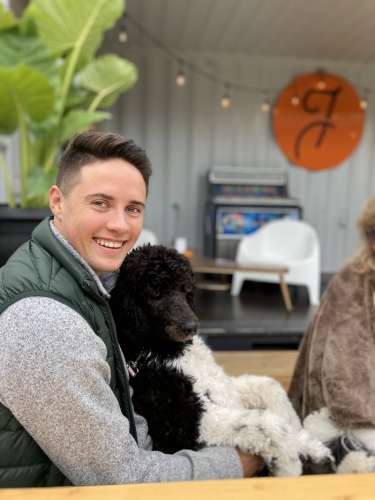 As his gender transition began, Athletics took steps to ensure his continued participation in the sport, including offering him his own change room and a uniform with alterations.

“For me, that really speaks to what the University cares about,” said Lane, who graduated from U of G in 2019 with a business degree. “They didn’t care that I wasn’t a star on the field anymore, they cared about who I was and what I was going through.”

While Lane was deeply appreciative of these offers, he decided to end his varsity playing days. He wanted to be seen as a male, and continuing to play on the women’s team conflicted with that.

He was eager to give up his female identity, but changing his identity as a varsity athlete was challenging.

“That was a huge title for me,” he said. “One of the hardest parts of the transition for me was giving that up. I’d been an athlete my whole life. And while I was moving forward with something that was going to make me extremely happy, there was still a lot I had to give up.”

The team brought him on as a coach, keeping him involved in field hockey and allowing him to maintain the relationships and camaraderie that were so important to him. Once the pandemic allows, Lane hopes to continue coaching with the team.

“I have really strong feelings about Gryphon Athletics and my relationship with that community,” he said.

Lane said he did not know what it meant to be transgender when he was in high school. He remembers identifying more as male than female but didn’t feel that he was hiding from his true identity or being untruthful about it to himself or others. Something was missing, but he was not sure what it was.

“Nothing was really off, but I didn’t feel completely whole,” he said. “It wasn’t until I was in university, through playing varsity athletics, meeting new people and making great friends, that I was introduced to different ideas and views about life. I started to understand what being transgender was.”

All of his experiences have made Lane a strong advocate for the inclusion of trans athletes in the sports community. He wants to see sport organizations act as athletes’ allies and establish inclusive pathways – safe and welcoming spaces that allow all people to continue to participate on the gendered team they choose.

The sports world is still trying to figure out what inclusion of transgender athletes looks like, he added, but it’s clear that far more conversations and education need to happen.

“I think it is so important, especially for youth athletes, that they have the opportunity to play and be their authentic selves. There is no reason why a young trans person can’t play the sport that they love and be happy.”