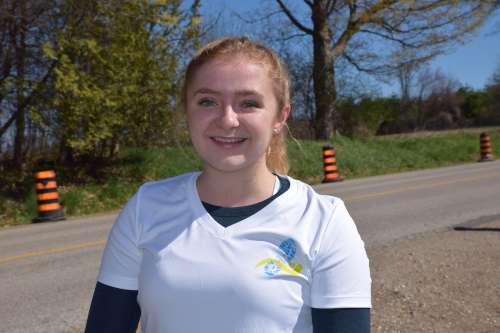 U of G Gryphon runner Haley Davis, a cancer survivor, raised more than $25,000 for cancer foundations.

On May 1, the beginning of Brain Cancer Awareness Week, University of Guelph distance runner Haley Davis set out on a 150-kilometre fundraising run in support of cancer foundations.

In summer 2019, Davis was diagnosed with a rare brain tumour. A top Ontario high school runner, there was fear the tumour could end her running career. She underwent emergency surgery.

After residual cancer cells were detected, she underwent a second surgery this past January and radiation therapy that ended April 12, just 18 days before her run.

Surrounded by family members and friends she started her run from Guelph to Goderich at a spot near Guelph Lake. 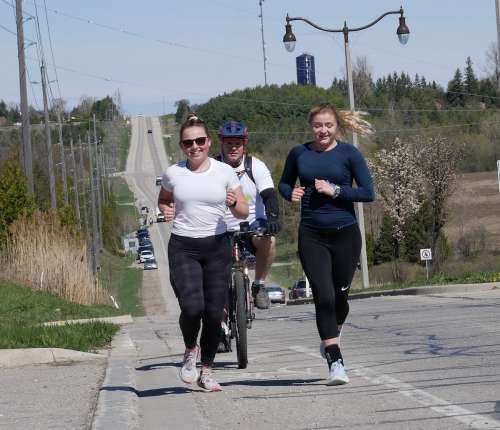 Haley, right, starts the run with her friend Taylor Embree and her dad, Jay, on bike.

“I was so excited and eager to start the run,” said Davis, a bio-resource management student at U of G. “My emotions were happy ones. My mom, Janet, gets really emotional when we bring up the subject of brain cancer. I guess I’ll know better what she was going through when I’m a mother, but her emotions were also really happy ones that day.”

The morning was made more uplifting and special by the surprise arrival of a young boy who had been at the Juravinski Cancer Centre in Hamilton at the same time as Haley. He was undergoing treatment for the same type of brain tumour.

“He and his wonderful family surprised me and showed up with a very generous donation, so I was overwhelmed by their generosity,” she said. “Just seeing him in a non-cancer setting and to see how well he was doing was just awesome.”

Davis set a goal of running 30 km per day in 15-km intervals over five days. Most of the route followed the Guelph-to-Goderich Trail from Guelph to Lake Huron. Accompanied by her cycling father, Jay, she reached Goderich on schedule. 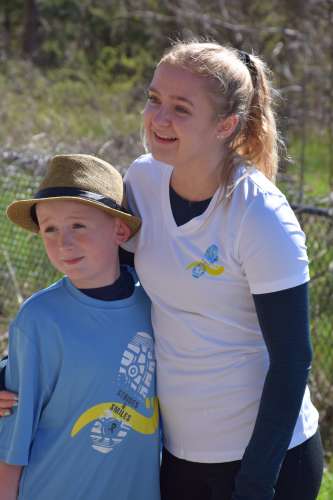 Haley with Owen. The two were treated for the same cancer at the same time at the Juravinski Cancer Centre in Hamilton.

Although she kept a positive attitude throughout, there were times when she needed “a little push” from friends and family to keep her going.

“I tried to stay positive throughout the run, but my parents can definitely vouch for the fact that sometimes it was hard to get up in the mornings to prepare myself for the next 30 kilometres,” she said. “But I did have some friends and my dad biking and running with me and they definitely helped keep my spirits up. We also had music playing.”

Davis set a goal to raise $10,000 through her Strides and Smiles GoFundMe campaign for the Terry Fox Foundation and the Brain Tumour Foundation of Canada. She reached that goal before taking her first stride and, as of May 19, had collected just over $25,800.  Donations can still be made to the campaign until the end of May.

“It’s incredible how much support the campaign has received,” she said. “I keep seeing more people wanting to contribute. It blows my mind.” 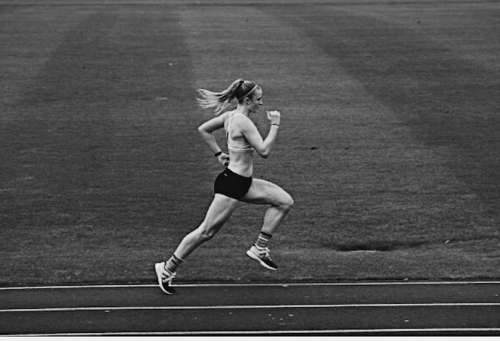 Haley sprints to the finish line as a varsity athlete.

Davis is a cross-country and track and field runner with the U of G Gryphons. Before her surgery, she was training for the eight-kilometre cross-country competition. On the track, she competes in the 800- and 1,500-metre events. The COVID-19 pandemic halted all varsity competition, but training continued. 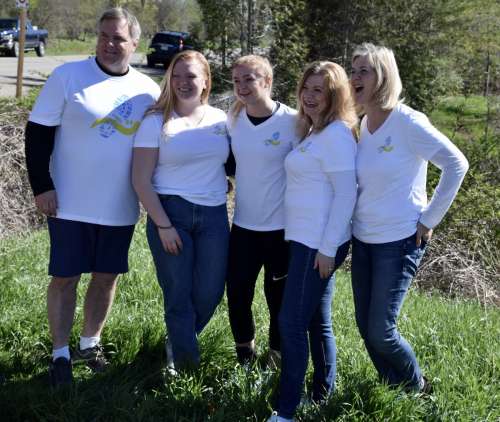 Haley with members of her family before her fundraising run.

Being an athlete gave her the strength and resilience to cope with her diagnosis and treatment. But battling cancer also made her think differently about racing.

“As an athlete, you push yourself to break through so many different boundaries and sometimes it’s hard to crash through them,” she said.

“In races, you put a lot of stress on your body and mind. But after going through the first surgery, I remember thinking that a race is not going to seem as daunting, because of this experience. Sometimes you have to remember the original joy you found in your sport and remind yourself that it’s a privilege to be able to compete.”

About 50,000 Canadians are affected by brain tumours each year and nearly one in two Canadians are expected to be diagnosed with cancer during their lifetime.

“I plan to do a lot of things in my life,” Davis said. “I try to live life to the fullest. My pipeline goal is to be on the national team and represent Canada for track and field or cross-country. I really hope to compete for my country someday. But I also want to grow up and have a family, travel and do lots of things.”