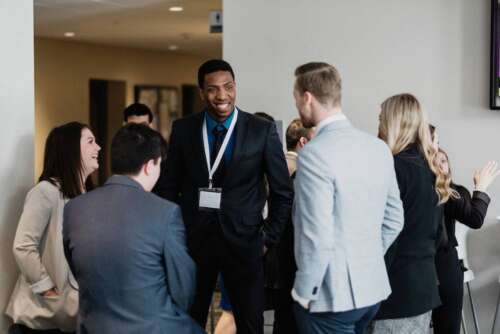 A pre-pandemic gathering with Guelph Black Professionals founder Bankole Alade in the centre.

To become a successful professional in any field, a university student needs role models, mentorship and a network of support, says Bankole Alade, a University of Guelph marketing student. He started Guelph Black Professionals to generate that kind of support for Black students at U of G.

Born in Nigeria and raised in Edmonton, Alade came to U of G to play basketball for the Gryphons. He said his first year was subpar, both academically and on the court. He thought about the sacrifices his parents made for him and about where his talents would best be suited. He gave himself a pep talk, switched his program to marketing and joined campus clubs. By building a support network for himself, he gained experience and confidence and turned a corner.

During this time, he realized Black students were underrepresented in those clubs and lacked networking and mentorship opportunities with Black professionals. 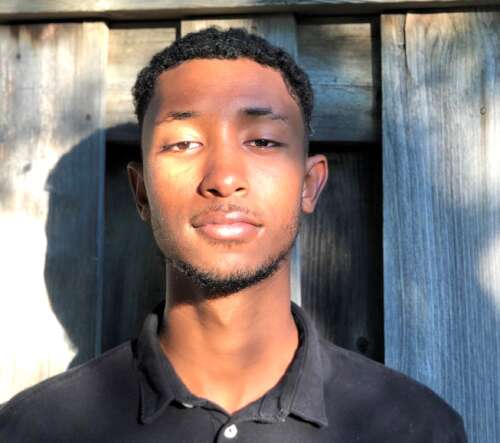 “I participated in a lot of different business clubs and noticed there weren’t a lot of Black students in them,” he said. “There were Black students in my classes but none of them attended these events, events that help you get jobs and build your career.”

Guelph Business Professionals, or GBP, is an interdisciplinary group focused on promoting professional development and career opportunities for Black students at U of G. Its branches on campus include engineering, pre-med, pre-law, business and art.

“GBP is about improving the representation of Black students and their stories at U of G and empowering Black voices from a professional standpoint and with a career development focus,” said Alade.

He moved with his family to Edmonton as a child. His father had a law degree from Nigeria but had to retrain as a lawyer in Canada, working multiple jobs to make ends meet. He eventually started his own law practice in Fort Saskatchewan, the first Black lawyer in the small Alberta city.

“Many people told my father that he wouldn’t succeed in that city, but he worked very hard and established himself,” Alade said. “He is definitely a role model for me.”

Mikyas Tessema, president of the engineering branch of GBP, is an environmental engineering student. Born in Minneapolis, Minn., and raised in Washington, D.C., he moved to Toronto with his family. When his parents returned to the U.S. in 2019, Mikyas stayed in Canada to attend U of G.

“Joining GBP has really changed my perspective on what it means to be part of a team at school,” said Tessema, who said he wasn’t interested initially in joining University clubs.

Alade and Tessema collaborate on a project.

“But this makes me feel like I have more purpose. It is great to help facilitate events that give Black students an opportunity to network with employers, professors and each other and help them in their professional career development.”

The group has held a BIPOC networking event, alumni nights with successful Black U of G grads, a résumé writing and interview workshop, ongoing alumni spotlights on their Instagram and LinkedIn pages. Alade hopes recruitment drives will help boost enrolment of more Black students at U of G.

“From my own experience, if I had these types of networking opportunities earlier in my life, I would be further along in my career development than I am today,” Tessema said.

“Making sure the opportunities are readily available for students now is a very important goal for GBP. As much as everyone thinks they are the master of their own destiny, it is always good to have a mentor or two, or to hear a point of view from someone else. That can really change your opinion on something.”

He and Alade said the Black Lives Matter movement has generated an outcry over racial discrimination and inequality and inspired numerous efforts to foster change. That heightened awareness has also helped raise GBP’s profile.

“I think the events that happened have definitely put a spotlight on the forms of institutional racism and other hardships that Black people in North America go through,” said Tessema. “GBP is using the spotlight that is on these issues to make a change, not just to be an observer.”

Continuing the effort to build a more inclusive and equitable society is the only thing that will bring about lasting change, Alade said.

“GBP was very successful at attracting attention and support in 2020, and that is great,” he said. “But I wonder how successful we would have been had these events not brought the problem to the forefront. And how successful will it be two or three years from now, when the conversation is less in the forefront?”

“I want to see it grow much bigger. We want to keep this momentum going and I want to see just how big we can get.”

[Transcript for the video below]