Fourth-year physics major Melanie Hudakoc is taking family games night to the national level. This month, Hudakoc, her cousins and their partners will compete in an episode of Family Feud Canada, hosted by comedian Gerry Dee.

Hudakoc says her family has long wanted to compete on the game show popularized in the United States. When she saw a call for contestants to compete on Family Feud Canada, she immediately contacted her cousins.

“We’re a high-energy family – we knew this was something we could have fun with,” says Hudakoc. 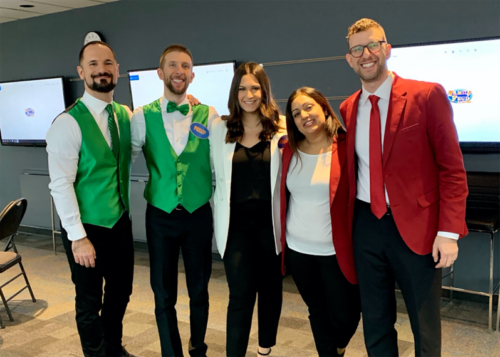 U of G’s Melanie Hudakoc (centre) and her family teammates

Her family was keen to highlight their diversity. Says Hudakoc, “We are an Italian-Canadian family, but with a Modern Family twist.” Her team includes an interracial couple, members of the LGBTQ+ community (one of whom is a refugee) and herself – a woman in STEM (science, technology, engineering and mathematics).

After watching her family’s application video and meeting them in person, the producers invited them to join the show.

“We represent what it means to be Canadian – a strong connection to our roots, while being inclusive. And we have enough enthusiasm to power a lighthouse,” says Hudakoc.

For the audition and filming, Hudakoc says her background in physics was key.

“Majoring in physics helped me stand out during the audition. Physics taught me how to think quickly and efficiently – skills that were really useful when competing on a game show.”

Her physics background helped her land this unique experience and has been Hudakoc’s passion since she took a first-year course in physics for biological sciences.

“I was initially enrolled in a different program when I came to the University of Guelph,” she says. “Now, I’m in my fourth year doing something I never thought I could thanks to that first-year course. It sparked a drive for me to understand the world around us through science. Physics takes hard work and discipline, but it’s not as intimidating as you may think.”

Hudakoc switched to a bachelor of science degree in her second year, majoring in physics and minoring in mathematics.

An avid supporter of women in STEM, Hudakoc participates in University outreach activities and is a U of G social media ambassador. She is also vice-president (communications) of the physics and astronomy club.

“I strongly believe that your undergraduate years should be used as a time to discover your passions and explore different things,” she says.

Watch for Melanie and her family on Family Feud Canada this December and listen for a University of Guelph mention.