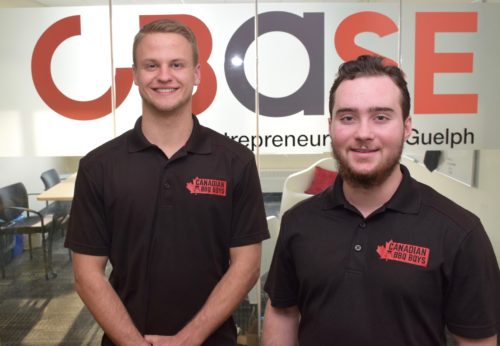 If you only knew what lurked under the grill of your prized barbecue, you would make much more of an effort to keep it clean – or hire someone to clean it for you.

Enter the Canadian BBQ Boys, a business started by U of G students Matt McCoy and Michael Sutton. They have lifted the grill on some fairly disgusting appliances and put the like-new shine back into them.

While still in high school, McCoy and Sutton knew they wanted to be in business. After their first year of business school at U of G, they discovered a market for their elbow grease when put to the task of cleaning greasy barbecues. They cleaned about 300 of them in their first summer in the BBQ game.

Keeping higher-end barbecues spic and span not only prolongs the life of the appliance, they said, but safeguards the health of those who eat food cooked on one. The reputation and client roster of their summer BBQ cleaning business grew rapidly.

Now, the Canadian BBQ Boys have the backing of one of Canada’s best-known entrepreneurs and investors after a successful appearance on the popular CBC television program Dragons’ Den. Their business could go national.

“In accounting class back in Grade 12, we were talking about how we didn’t want to go back to our same-old traditional jobs,” said Sutton. “My parents got a cleaner in to clean their barbecue. He charged a lot of money and didn’t do the job very efficiently. We saw it as an opportunity, so we just ran with it.”

McCoy said the business partners made a study of BBQ cleaning online, then went to Canadian Tire and picked up $200 in supplies. Then they started knocking on doors in their Oakville, Ont., neighbourhood. 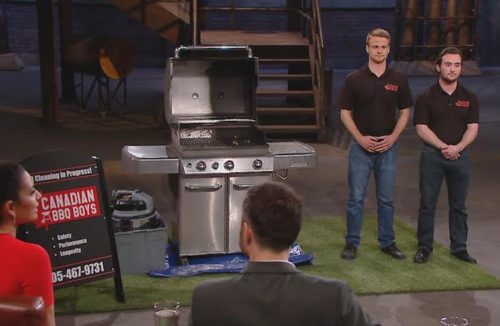 “We soon discovered that cleaning them wasn’t as easy as the videos made it out to be,” McCoy said. The first test barbecue took a total of eight hours to complete. They would have to get better and faster and use more effective cleaning products.  “We were committed to it, so we just found a way to get it done.’”

Both admitted that the work itself is “a gruesome task,” but very rewarding once the appliance is rejuvenated.

“On the first day we went out, we got five sales, just knocking on doors,” Sutton said. “We just kept grinding, putting our feet to the pavement. And we got about 300 customers that summer, charging $60 per cleaning.”

What they learned from that fairly large sample size is that if a barbecue is left unkempt, it will go from prized grill to unsightly mess.

“In about 75 per cent of the barbecues we’ve cleaned, there have been rodent droppings and dead insects,” McCoy said. “You open it up and you see animal nests and just about anything once you take the cooking grates off. And when the burners heat up, all those fumes go directly up into the food. So, it can be quite disgusting to check under the hood.”

Greasy drippings also pile up under the grill and can lead to flare-ups and serious fires, they said. Dirty barbecues also lead to uneven or slow heating and generally poor operation. A thorough professional cleaning achieves like-new performance and greatly prolongs the life of the appliance, they said. 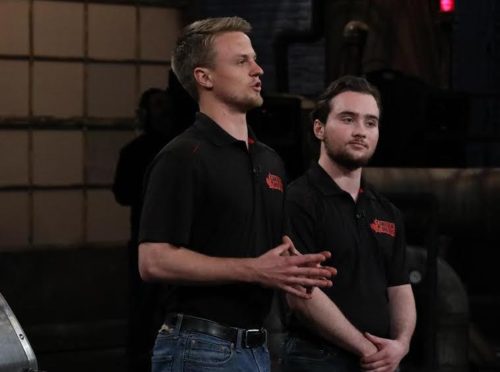 In their second year of operation, the business got a major boost from the Hub incubator program of U of G’s John F. Wood Centre for Business and Student Enterprise. They received mentorship, $8,000 in program funding, another $2,000 from Innovation Guelph and general support on how to get a lean start-up off the ground.

They now charge $175 for their services. Most of their clients’ barbecues are worth thousands of dollars. Their website describes the services they offer. https://canadianbbqboys.com/pages/about

McCoy and Sutton are now in their fourth year of business school at the University of Guelph.  Business for their Canadian BBQ Boys has quadrupled since that first summer.

And now, something extraordinary has happened, something that should help them grow the company more widely across Ontario and possibly across the country.

They find themselves backed by world-famous businessman and venture capitalist Jim Treliving, who is chairman and owner of Boston Pizza. Treliving saw a lot of potential in the BBQ cleaning business after the young entrepreneurs made a compelling pitch for investment on Episode 12 of Season 13 of Dragons’ Den, aired on Jan. 10.

Treliving has been a cast member of the popular television program since it launched in 2006. No stranger to hard work, Treliving believed in the BBQ Boys – so much so that he decided to invest $50,000 for a 10-per-cent stake in the company. A due diligence process must be completed before the deal is finalized.

“What we’re doing right now is building out an online retail store on our website,” McCoy said. “Often times, people don’t just want a cleaning, they also want parts to be replaced and they want new accessories.”

The business partners have formed a strategic relationship with a local retailer to supply parts and accessories to their customers.

“Eventually, we want to really build out our store and expand across country with our service,” McCoy said.