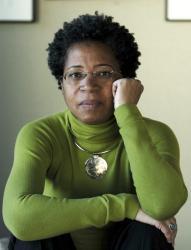 Graduates of the University of Guelph’s creative writing MFA program have been nominated for the 2018 Toronto Book Awards, established in 1974 to honour books of literary or artistic merit that are evocative of Toronto.

The nominated book, called The Unpublished City, was curated by Dionne Brand, a professor in U of G’s School of English and Theatre Studies, and features prose and poetry from emerging, unpublished Toronto writers — including graduates of U of G’s creative writing MFA program.

Brand is an award-winning author and poet whose writing is known for its beautiful language and for tackling themes of social justice and issues of gender and race. She is also Toronto’s former poet laureate.

Also shortlisted for the 2018 Toronto Book Awards are Lee Maracle, David Chariandy, Carrianne Leung and Kerri Sakamoto. The winner will receive $10,000 and each finalist will receive $1,000.

The 2018 Toronto Book Awards will be presented Oct. 10 at a ceremony at the Toronto Reference Library’s Bramand Bluma Appel Salon beginning at 7 pm. The ceremony is open to the public.