Fear alone may be enough to cause vulnerable species to go extinct, according to a new University of Guelph study.

Prof. Ryan Norris has discovered that the mere smell of a predator affects the reproductive success of fruit flies. 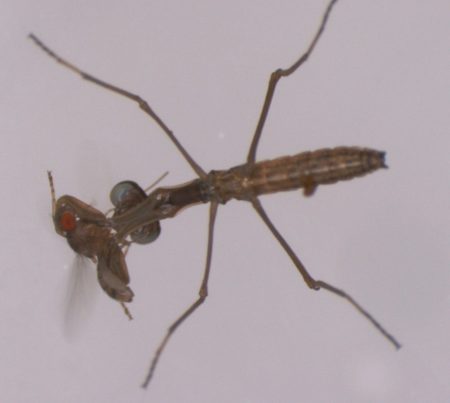 Chinese mantis eating a fruit fly in the lab

Published in the journal Proceedings of the Royal Society B, the study involved exposing fruit fly populations of various sizes to the scent of praying mantises, a natural predator. The researchers determined effects on reproductive success by counting and weighing fruit fly offspring.

Fruit flies were studied because they have a short life cycle and simple reproduction.

The effect of predator fear was greater on smaller populations, whose risk of extinction was seven times higher than that of larger populations.

“This finding has implications for species already endangered and living in smaller populations because it shows they are more vulnerable to predator fear,” Norris said.

“It seems once a population reaches a certain size, fear alone may lead to its extinction.”

The researchers suspect the flies feel protection in numbers, as their vigilance increases when numbers decline.

“We may expect this to occur for social animals that live in packs or herds, but we have found it also holds true for species like fruit flies that don’t live in tightly knit groups,” said Elliott.

“Just the lingering scent of a predator is sufficient to cause the population to continue to decline.”

The study also helps explain a long-standing biological phenomenon related to population size and extinction known as the Allee effect.

Typically when a population grows, competition for food and mates increases, and reproductive success and survival decrease. Biologists have assumed that the smallest populations grow and rebound most rapidly.

But sometimes the opposite happens, with small populations growing most slowly. This is known as the Allee effect.

Previous investigations have focused on factors such as difficulty finding a mate, inbreeding or social dysfunction in small populations, said Norris.

“Our study provides a possible answer to this mystery and gives us a better understanding of how powerful predator fear can be.”