A University of Guelph professor, poet and novelist has been named a Member of the Order of Canada. 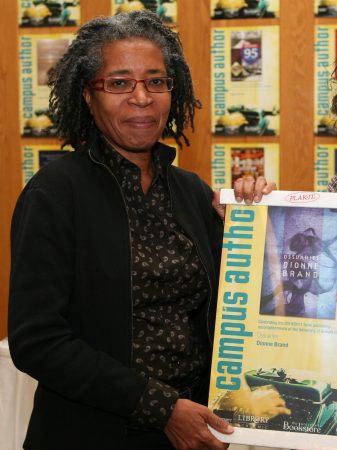 Prof. Dionne Brand, School of English and Theatre Studies, was among 99 Canadians named to the Order by Governor General David Johnston June 30. Brand was recognized for her contributions to Canadian literature and poetry, and for promoting awareness of gender studies and intercultural relations.

July 1 marks 50 years since the creation of the Order of Canada, which is one of the country’s highest civilian honours. Nearly 7,000 people have been named to the Order.

“I am delighted to recognize these new recipients of the Order of Canada on the eve of the 150th anniversary of Confederation,” said Johnston.

“The individuals on today’s list, just like those appointed half a century ago, are truly inspiring as they have helped to build the smarter, more caring nation that we, as Canadians, are all so proud to call home. Let us celebrate these remarkable individuals today and every day.”

She grew up in Trinidad and came to Canada at age 17. Her writing often explores gender, race, sexuality, injustice and feminism.

In a statement to the Globe and Mail, Brand said she was honoured to be appointed to the Order of Canada.

Referring in her statement to “unknown and unheralded Black Canadians,” she wrote: “I want to highlight here that glowing genealogy: from Marie Joseph Angélique who, in her escape from enslavement, set fire to the city of Montreal in 1734; to the young girl in 1772 whose name was Thursday and who fled from slavery in Nova Scotia; to the young men today in Toronto, whose names are written on cards and held in the police files of the city, apprehended for being human; to all of the people who wake up each day living in spite of racism and who, with conscience, protest on the streets calling for simply living; to all who every day do the groundwork to make Black life meaningful.

“All these beautiful lives are the reason I write. They make me wake up each morning asking: What poetry must I make to requite their being? What world must I imagine? What words must I write today?”