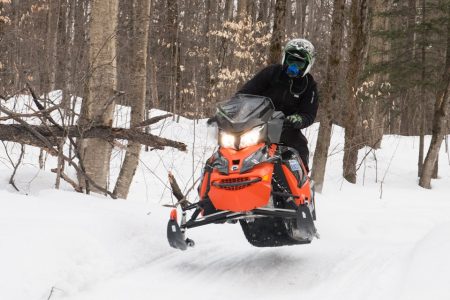 A participant on the trail-riding portion of the study near Haliburton. Photo by Olena Klahsen.

Whether snowmobiling can be deemed a health pursuit is open for debate.

Some people would say no. Casually cruising along at a steady tempo on a flat, well-groomed trail requires little effort (outside of loading and unloading the snowmobile from a trailer).

On the other hand, wrestling a powerful 200-kilogram machine through hilly twists, turns and deep, powdery snow takes a measure of human endurance and strength. Sometimes the machine gets stuck, and needs to be hauled out of a snowbank with brute force.

The Canadian Council of Snowmobile Organizations (CCSO) caters to riders at both extremes and everyone in the middle. Now, it wants to put some research into the potential health benefits of snowmobiling.

It’s enlisted University of Guelph professor Jamie Burr and his Human Performance and Health Research Lab to help. In the past, Burr worked with individuals driving off-road vehicles, measuring participants’ activity as they worked to keep the vehicles upright and moving.

Do snowmobilers likewise realize fitness benefits in pursuing their chosen sport? That’s what Burr and his lab members in the Department of Human Health and Nutritional Sciences have set out to discover.

Last fall, they surveyed more than 4,000 of the national snowmobile organization’s members to determine what they considered characteristics of a hard ride — hills, fresh snow, trail-blazing — and of a comfortable easy ride, with groomed trails and only minor changes in elevation. 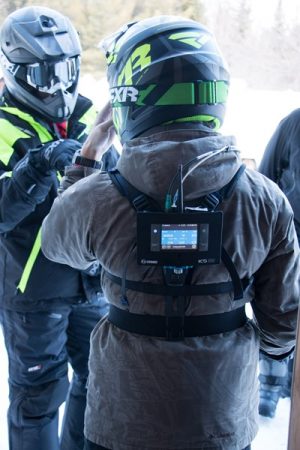 Then this winter, lab members led by master’s student Tania Pereira worked with CCSO to create trails that characterized such rides in the 80,000-acre Haliburton Forest and Wild Life Reserve. Snow was light in the southern part of the province this winter; near Haliburton, though, they had enough to carry out their studies.

The researchers enlisted 20 riders to participate. All riders rode the same recreational 600 cc. snowmobile, provided by the researchers. As well, they were equipped with metabolic computers — breathing devices that resemble jet fighter-like pilot’s masks — covering their faces.

As they went through the 20-minute course, a backpack-mounted computer connected to the masks measured their oxygen intake and carbon dioxide output, indicators of how hard the participants were working on their rides.

After the rides, participants pedalled on an exercise bike for 10 minutes, so researchers could compare their heart rates while working on the bikes to readings recorded on the trails. That comparison helps determine how active the participants were while snowmobiling versus being engaged in conventional exercise.

The researchers will repeat this test on a representative course in more severe terrain and higher altitudes near Revelstoke, B.C. After that, they’ll start compiling and comparing data on leisurely use versus more extreme use.

“We’re not ready yet to make statements about the health benefits of snowmobiling,” says Burr. “Sometimes it’s hard work, sometimes less so. We know that even easy exercise like walking and light jogging contribute to people’s fitness — so, does snowmobiling? That’s what we want to find out.”