Challenging the status quo will be the focus of Ontario’s attorney general during the annual Truscott Lecture in Justice March 27 at the University of Guelph.

Yasir Naqvi, who oversees the justice system in Ontario, will focus on pretrial delay in criminal cases during this free lecture. 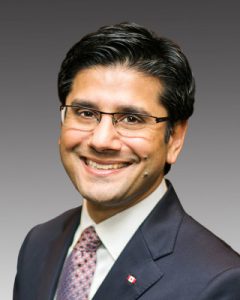 He will speak from 6:30 to 7:30 p.m. in Alexander 200. A reception will follow in the Summerlee Science Complex atrium. Both the lecture and the reception are open to the public.

The Truscott lecture series is part of a justice studies initiative begun at U of G in 2009 to commemorate the struggles of Guelph resident Steven Truscott and his family.

Truscott is known across Canada for his decades-long battle to prove his innocence after the 1959 murder of schoolmate Lynne Harper. He was wrongly convicted of the crime at age 14 and spent years in prison before his release in 1969. He was acquitted by the Ontario Court of Appeal in 2007.

The lecture series allows for a more in-depth and nuanced examination of criminal justice issues than can be gleaned from traditional media or social media, said Troy Riddell, a political science professor and one of the lecture’s organizers.

He said the event is intended to foster more informed dialogue and critical analysis amongst students, members of the public and practitioners in order to further improve the criminal justice system.

Naqvi will hold a roundtable discussion with students before the lecture.

Riddell said his visit is “a tremendous opportunity for students to interact with a key policy-maker in justice policy, and demonstrates that U of G’s strength in criminal justice, law and policy is becoming increasingly recognized.”

Naqvi was named to his post in mid-2016. He practised international trade law before entering politics in 2007.