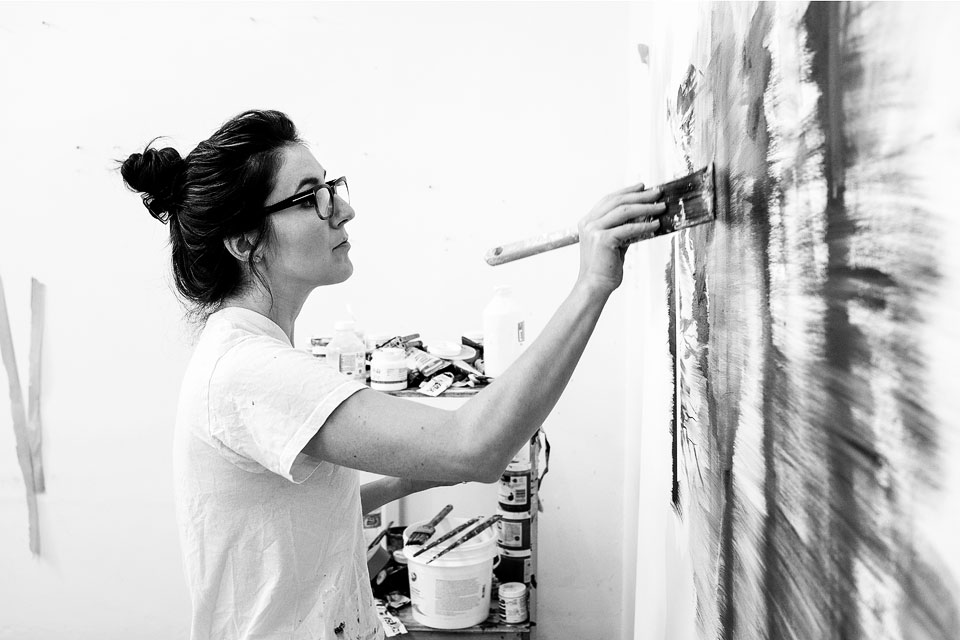 It had already been a tough day in the studio before artist Melanie Authier spilled an entire container of pink ink on the floor. She grabbed sheets of paper to mop up the mess. Noticing how the colour marked the pages, she looked more closely.

That’s how Authier ended up painting a pink-infused diptych that’s now included in a show of her abstract works that opened this month at the Art Gallery of Guelph (AGG). The show is the third stop on her first touring exhibition of seven venues across Canada between 2016 and 2018, and a high point for the 36-year-old University of Guelph graduate whose works are gaining critical attention at home and abroad.

The exhibit, called “Contrarieties and Counterpoints,” will run until April. It represents a homecoming for the MFA graduate, as well as a re-acquaintance with the exhibition’s curator, Robert Enright, a professor in U of G’s School of Fine Art and Music, and the University Research Chair in Art Criticism.

Recalling that day in the Ottawa studio she shares with her husband, Martin Golland, also an MFA grad, she says, “I turned a mishap into a game.”

That yin and yang quality plays out in various kinds of creative tensions among the 18 works in the exhibit. Glancing around the main-floor gallery space, Authier says, “The paintings talk in new ways. We know which paintings enjoy being in proximity with each other.”

Her works span giant acrylics on canvas, to smaller pieces in watercolour and ink on paper. Authier’s palette ranges from colour-drenched canvases to black and white renderings, and works in grisaille or shades of grey. 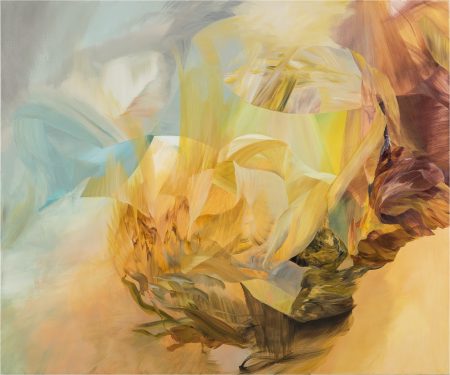 The current show began when a solo exhibition planned for the Thames Art Gallery in Chatham, Ont., turned into a touring exhibition. The gallery asked Enright, a longtime journalist and art writer, and founding editor of the quarterly art magazine Border Crossings, to write text for the show catalogue.

That led to an invitation for Enright to become guest curator of the travelling exhibit. Before arriving in Guelph, the show was at the Ottawa Art Gallery last fall. From here, it will go to galleries in Saskatoon, Montreal, Halifax and Rimouski, Que.

Authier grew up in Montreal and attended Concordia University for her bachelor’s degree. Golland also went to Concordia, but the couple didn’t meet until taking up adjoining studio spaces at U of G in 2004.

Both were drawn by the chance to work with practising artists, spacious studios and proximity to Toronto.

Recalling his first look at her oeuvre more than 10 years ago, Enright says Authier was “alive to ideas. She was a wonderful student, a good writer, a complete participant in the seminar proceedings. She already showed terrific promise and energy.”

Enright says the Guelph installation occupies two galleries on the main floor, an arrangement that allows for tone leading, or using the colour palette to lead the viewer from one piece to the next. “It’s a handsome, intelligent show.”

The show title also refers to Authier’s composition style, what Enright calls a “process of discovering the painting in the making. She likes to almost paint herself into a corner, then paint her way out.”

Authier’s work has been shown in exhibitions across the country, including a 2012 show at the National Gallery of Canada, which holds her artwork.

Although Enright has curated earlier shows, this is his first touring show and the first one he has curated at the Art Gallery of Guelph.