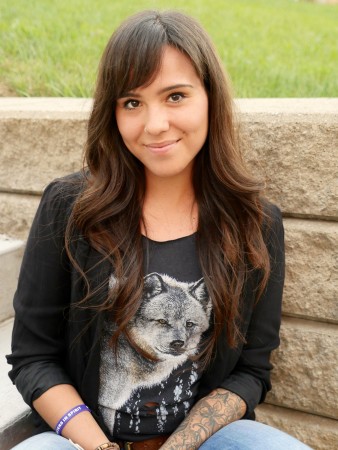 Tunchai Redvers grew up in a Dene First Nations community of about 3,500 people in Hay River, Northwest Territories. Like many aboriginal youth in Canada, she experienced feelings of isolation and witnessed the effects of substance abuse.

“Drug and alcohol addiction was very present and visible growing up in the communities and also within my extended family,” says Redvers, BA ’16. “This visibility made it really normalized, and I saw a lot of people suffering and struggling.”

Recent headlines have brought national attention to the high rates of aboriginal youth suicide in Canada, with some victims as young as 10.

“There really is a crisis in Canada,” says Redvers. “We were just so overwhelmed and tired of hearing about these statistics, so we decided to do something about it.”

In October, Redvers and her filmmaker brother, Kelvin, launched a national campaign called We Matter to provide hope and support to aboriginal young people. It models itself after the “It Gets Better” campaign for LGBTQ youth.

The siblings created short videos of aboriginal role models across Canada who beat the odds to not only survive but also thrive. Aboriginal icons such as Métis author Joseph Boyden, comedian Don Burnstick and CBC reporter Angela Sterritt are among those who have shared their struggles in We Matter videos, which are posted on the website and have received thousands of views.

“I still get emotional watching some of the videos,” says Redvers. “There has never been a space like this before, especially for young people, to have so many positive, strong indigenous voices in one public spot.”

She says We Matter gives the aboriginal community a platform to share their stories of hope and survival while turning tragedy into possibility. The website also welcomes video submissions from anyone who wants to offer messages of support to indigenous communities.

Redvers attributes some of her own identity struggles with the lack of aboriginal role models she had growing up.

“I grew up thinking there was no such thing as a super successful aboriginal person because I never saw them represented in media or in the news,” says Redvers. “They were invisible. If I had access to a site like We Matter as a kid, it would have changed things for me.”

At 13, she moved to Yellowknife with her father to escape bullying and have access to extracurricular activities available in a larger city.

Although Redvers faced some of the same challenges that have contributed to suicides among aboriginal youth, she didn’t become a statistic. Instead, she found an escape through education, graduating from U of G earlier this year with a BA in international development studies. She is now pursuing a master of social work degree.

According to Health Canada, First Nations youth face a suicide rate that’s five to seven times higher than for non-aboriginal youth, and Inuit youth have some of the highest suicide rates globally at 11 times the national average.

“I think it comes down to a real sense of hopelessness in youth and getting to the point where you feel nothing is going to get better,” says Redvers. She points to the lingering effects of colonization and residential schools, loss of cultural traditions, substance abuse, and lack of support for those who need help. Teen pregnancy and bullying were also common in her community. Her own grandmother grew up in a residential school in the Northwest Territories, and her extended family was affected by drug and alcohol abuse.

Since launching in October, We Matter has reached more than 1 million people on social media and has received national media coverage. Redvers hopes the campaign will help guide indigenous youth struggling with suicidal thoughts and hardship.