A new play exploring freedom and incarceration and staged by University of Guelph students opens today on campus.

Directed and written by Prof. Judith Thompson, English and Theatre Studies, Hothouse runs from Nov. 11 to Nov. 19 at the George Luscombe Theatre in MacKinnon 101. Tickets are $10. 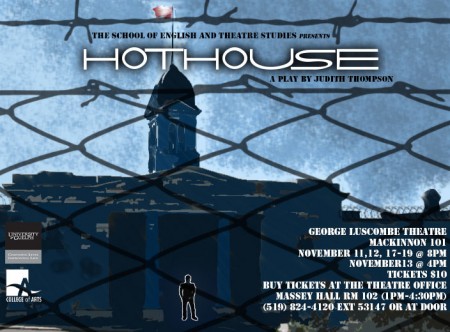 The play is inspired by The Convict Lover, a non-fiction work published in 1996 by Canadian writer Merilyn Simonds. She wrote the book after discovering a cache of letters in her attic. The letters were written in 1918 by a convict who called himself Daddy Long Legs to a Kingston girl named Phyllis.

Thompson adapted the play, which premiered at the Isabel Bader Theatre in Kingston in February 2016.

“I was excited to write a play set in my hometown of Kingston, but as I wrote I realized I was not interested in a faithful adaptation of the book, but rather in exploring the concept of freedom and incarceration, both literal and metaphorical,” she said.

“The play focuses on three stories: the story of the letters, the story of the young girl, now 106 years old in a nursing home and still waiting, bound by the illusion of romantic love, and the true story of Ty Conn, a bank robber who spent most of his life in prison before escaping from Kingston Penitentiary. He had been imprisoned not just by our correctional system, but by memories of abuse that haunted him.”

The play includes seven songs sung by the cast.

“I am awed by the calibre of acting and singing of the University of Guelph theatre students. The performers and the technical crew have been a joy to work with,” said Thompson.

“We know the audiences will walk away not only singing the gorgeous songs, but thinking seriously about their own notions of freedom. The questions the play poses are: will love free us or imprison us? And is freedom worth any and all sacrifice?”