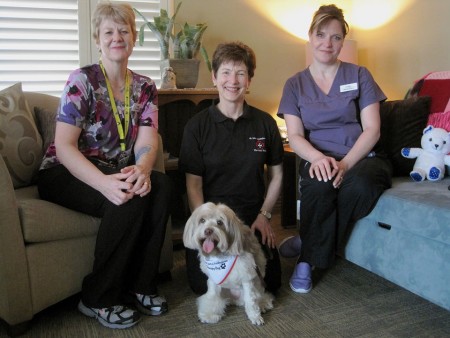 U of G’s Peggy Pritchard, centre, and her dog Taksim with staff at Guelph’s Hospice Wellington. Pritchard and Taksim will be on hand at U of G’s “Take a Paws” event next week.

Stressing over exams? Try “taking a paws” with therapy dogs, a new addition this spring to the U of G Library’s roster of exam stress-buster activities for students.

During the inaugural two-day event April 5-6, called “Take a Paws,” students can register for up to 15 minutes of interaction with trained comfort dogs in the library.

She and Taksim, her two-year-old Löwchen (“little lion dog”), will be among the dog-owner teams on hand at the library for students looking for a bit of four-legged relief from exam preparation. The duo also pays weekly visits to patients at Guelph’s Hospice Wellington.

Referring to existing therapy dog programs in hospitals, schools and nursing homes, Pritchard says, “There’s a lot of scientific evidence that supports this kind of program.”

One 2014 study suggests that interacting with dogs is as useful as conventional stress management programs for reducing anxiety and depression, including increasing immunity and lowering blood pressure.

More universities are introducing dog therapy programs to reduce stress during exam periods. Dalhousie University in Halifax, for example, offers a “puppy room” and rides to the SPCA. In a 2014 study during exam period at McGill University, students reported lower stress levels after interacting with therapy dogs in the library.

Pritchard helped organize the U of G program, including obtaining approval from the University’s Animal Care Committee, and working with other library staff and with St. John Ambulance. The event is co-sponsored by the Ontario Veterinary College (OVC) and OVC Pet Trust.

“’De-stress’ visits have taken off over the last three years,” says Heather Leong, an information technology analyst at OVC and volunteer coordinator with the St. John Ambulance therapy dog program in Cambridge. “I know these programs have been very successful.”

Along with other campus units, the library has run exam stress-buster events since 2011, including cookies and milk, yoga, “coffee with cops” (Timbits with campus police officers), colouring contests and make-your-own sundaes.

Pritchard says she can vouch for canine therapeutic qualities. When Taksim greets her at home, she says, “his tail is always wagging, he’s always smiling.”

Up to 20 students can take part in each 15 minute session and registration is required. For more information about exam stress-buster events, visit the library webpage.