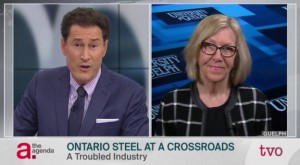 Yates took part in a panel discussion on Ontario’s troubled steel industry. The panel debated whether government should offer funds to bail out producers, including examining if the situation is comparable to the auto industry bailout and the aid offered by Quebec to Bombardier Inc.

A frequent commentator on labour issues, Yates has appeared in the Financial Post, Wall Street Journal, Globe and Mail, Toronto Star and Hamilton Spectator, and on CBC News World and TVO.