The Guelph Gryphons women’s hockey team won the provincial championship on home ice this past weekend, defeating the Western Mustangs 5-1 to win their first Ontario University Athletics (OUA) title since 1998. 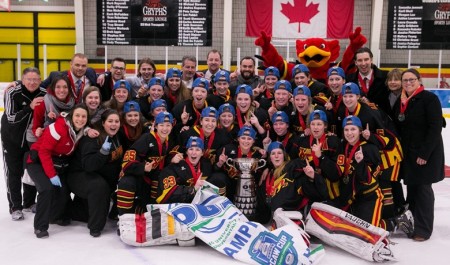 At the Gryphon Centre Arena, the women’s hockey team jumped out to a 3-0 lead before Western scored their only goal at the end of the first period.

Two more goals in the second period put Guelph in full control, and the Gryphons held Western to just 15 shots before hoisting the McCaw Cup.

The women’s team will now head to nationals.

At the Canadian Interuniversity Sport track and field championships, the men’s and women’s teams capped off a strong year, with each team finishing second overall.