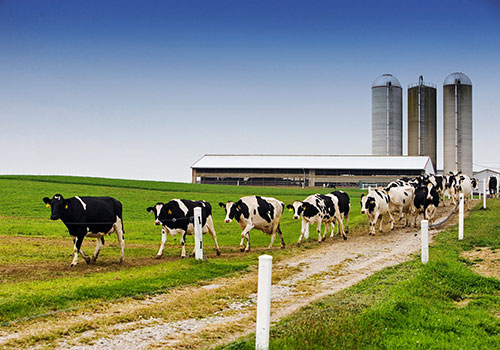 Old MacDonald’s farm is going high-tech with the help of sensors that can monitor livestock and crops. Prof. Rozita Dara, School of Computer Science, is working on “precision agriculture” technology that can help farms become more efficient. Precision agriculture uses a combination of algorithms, sensors and computers to collect and analyze data, which can help farmers improve the welfare of their livestock, enhance production and boost crop yields.

Most cows are equipped with radio frequency identification (RFID) tags that collect biometric information, including heart rate, blood pressure and feeding habits. Some robots, for example, can detect if a cow has eaten recently and then withhold food until the animal gets hungry again, which saves on feed costs.

With her background in data mining and analysis, Dara can help farmers interpret the data collected by sensors on their farms to maximize production and minimize costs. “Some of them generate data every few seconds,” she says of the sensors. That information is analyzed and interpreted to help farmers make the best decisions for their farm operations.

Sensors can also detect infectious diseases in their early stages to help prevent transmission and minimize the use of antibiotics. Mastitis, for example, causes inflammation in the udders of dairy cows, which can be fatal in severe cases. The disease costs dairy farmers in the United States up to $2 billion per year in lost livestock and milk production. Milk from infected cows must be discarded.

“Our goal is to analyze big data collected from the robotic sensors in order to find patterns that could be used to detect mastitis earlier,” says Dara. Early detection can help improve animal welfare by preventing the disease from progressing into an extremely painful condition for the cows. Administering antibiotics as soon as the disease is detected can reduce the amount needed to treat it.

Dara and her research partners will also be working to improve mushroom harvesting, a job that farmers have trouble finding workers to do because of its low pay and unpleasant working conditions. Farmers also need to train mushroom pickers for only a few weeks of work. Automating the process involves developing an algorithm that can help machines decide which mushrooms are ready to be picked and which ones should be discarded due to disease or because they are growing in tight clusters that impair growth.

Is Dara concerned about robots replacing human jobs in the future? “Yes, I have that worry,” she says. “Although some jobs may or will get eliminated, new job opportunities may replace the existing ones in the future.”

People are needed to program the algorithms that power the robots. Policies governing pesticide use, for example, can be programmed into the software to reduce waste and run-off. Cultural and environmental factors can also be used to customize robots to work in different countries; what works in Ontario may not work elsewhere. “When we are developing the software, we consider all of the different environmental, cultural and political factors,” says Dara.