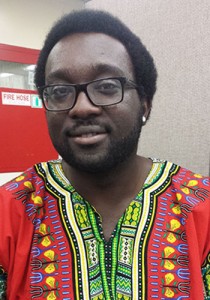 A University of Guelph staffer has won this year’s YMCA Peace Medallion from the YMCA-YWCA of Guelph.

Gbolahan Olarewaju, coordinator of international and multi-faith programs in U of G’s Office of Intercultural Affairs, received the award along with Guelph resident Kenan Makgalo.

They received the medallion in November for advocating for peaceful racial relationships and for serving as members of the board of the Guelph Black Heritage Society (GBHS).

GBHS is based at Guelph’s Heritage Hall downtown, where Olarewaju and Makgalo organized an open peace vigil this past summer after nine people were killed in a mass shooting June 17 in Charleston, South Carolina.

Olarewaju has been involved with GBHS since 2012.

He arrived in Canada from Nigeria in 2006 and earned a degree in biomedical sciences before completing a master’s in the Department of Human Health and Nutritional Sciences.

On campus, he has organized events, including a peace vigil in Branion Plaza last week.

Pursuing peace often involves small steps within communities, he says, as well as recognizing that “everyone has an obligation to be a peacemaker in their own way.”

It also requires conversation and sharing of perspectives and viewpoints: “People are not listening to each other anymore.”

Pointing out that the U of G community occupies a “privileged place,” he urges community members to recognize that “you’re in a place to make a change somehow.”

The YMCA Peace Medallion honours individuals or groups for commitment to peace through local, national or global contributions.