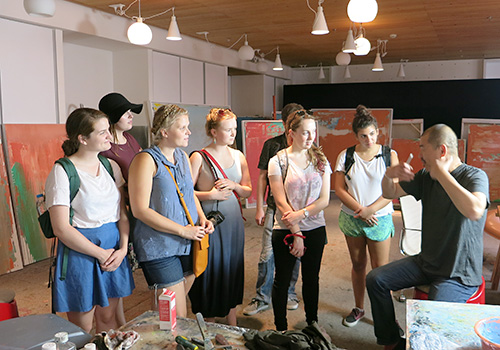 After spending four months with U of G students in Shanghai, China, U of G studio art professor James Carl says the Shanghai Semester is a unique opportunity for students to spend time in the “most exciting city in the world.”

The fall of 2014 was Carl’s first time escorting students on the Shanghai Semester, although the study abroad destination is going into its sixth year. For Carl, it was a return to a place he knows well: he first visited China in the mid-1980s after graduating from the University of Victoria and returned to study there a decade later.

“I’m a sculptor, and I discovered in China this vast universe of visual art, thousands of years of painting and sculptures I had never seen,” he says. Fascinated, he came back to Canada and earned a degree in East Asian studies at McGill, where he also learned Chinese.

Carl then returned to China and studied at the Central Academy of Fine Arts in Beijing — an experience that strongly influenced his work and life. He quotes Goethe: “Those who know no foreign language know nothing of their own,” and extends it: “When you learn about another culture, you learn to understand your own,” he says.

The changes in Beijing and Shanghai in the past three decades were shocking to Carl. “I never could have imagined the depth of change that is evident everywhere,” he says. “Shanghai, for example, has built 13 new subway lines in the past 10 years. Toronto can’t even manage one extension.” Not only is there new architecture and expansion, the older colonial buildings and historical areas are being restored.

“The population explosion and growth of these cities is unprecedented in human history,” he says. “Contemporary art has exploded as well, and the demand for Chinese art on the international market is consistently increasing.”

While teaching a course to the U of G students who joined him on the Shanghai Semester, Carl took them to a variety of locations, from the Shanghai Museum that holds artworks dating back more than 5,000 years, to galleries featuring contemporary art. “Our class was about looking,” he says.

Students participating in the program stay and study at the East China Normal University in Shanghai. They attend classes taught in English, earning credits towards their U of G degrees, and are required to attend an intensive Mandarin language course. The program is open to all undergraduate students.

The Shanghai Semester runs every fall; a variety of other study abroad programs are also available to students, including locations in India, Central Europe, Latin America, London and Paris.

Carl will return to China this fall with a new group of students. While enrollment for the 2015 Shanghai Semester is now closed, applications for fall 2016 will open later this year. For more information, visit the Centre for International Programs web page.