Growing up on her family’s pig farm in Essex County, Ont., Madonna Gemus-Benjamin often told her parents that she wanted to be a veterinarian and “help the farmers.” But her dream almost came to an end when she failed her first year at the Ontario Veterinary College and couldn’t continue her studies. 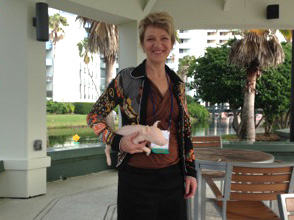 For the next decade, Gemus-Benjamin worked alongside her father and brothers as a business partner on the farm and became a director of the Ontario Pork Board, but she never lost her desire to be a veterinarian. In the determined pursuit of a veterinary career, she re-applied as a mature student in 1989.

Not only did she graduate this time, but she also went on to Michigan State University and completed a master’s degree in swine behaviour and a residency in swine production medicine. She also kept a small practice going in Ontario.

Gemus-Benjamin then moved to Alberta and worked for Elanco Animal Health for nine years before starting her own private practice. She continued doing research during this time, and in 2011 was hired by Michigan State University as an associate professor and swine extension veterinarian.

The welfare of pigs raised for food is a primary focus for Gemus-Benjamin. During her master’s research, she conducted a study in which students with little or no experience in working with pigs were asked to move three pigs through an obstacle course. “Some tried pleading with the pigs, some tried pushing or bumping them with the boards,” she says. “We found those students with lower self-esteem who had fewer problem-solving skills were the most likely to resort to aversive handling techniques such as slapping and kicking the pigs, especially as they got more frustrated with the animals.” She also conducted preliminary research demonstrating how the use of the electric prod at transport harms pigs and production.

During a recent outbreak of porcine epidemic diarrhea in Michigan, Gemus-Benjamin noticed that small farms were the last to know about the outbreaks, and had little information on preventing or controlling disease, so she established a database to help. “Once we have names in the database, we can advise them of emerging diseases, new treatments and other issues,” she explains. The database, called ROSIE, is named after a pig farmer in her 70s in remote Michigan who was caring for 10 sows and selling the piglets to her neighbours. “That’s an example of the farmer we want to reach because if these epidemics hit their farms, not only might it perpetuate the disease but it can wipe them out,” says Gemus-Benjamin.

“If you are passionate about something, the doors will open —
even if it’s not the door you had planned.”

She’s also studying pig behaviour to build on her earlier research. “We think if we stand behind a pig and yell, it will move away from us,” she says. “But it doesn’t, and this behaviour can frustrate the farmers trying to move the animals. Consider if some road-raged goofball came up behind you in their car honking the horn. You would monitor them through your rear-view mirror to see what was going on, and that’s what the pig does.”

She says when we use this type of pressure on a pig, it will circle to get behind the person, just as a driver might slow down or try to take the next highway exit to get away from the aggressive driver. Gemus-Benjamin and her colleagues are creating a series of videos and training sessions that farmers can access from their cellphones to enhance pig welfare right in the barn.

Gemus-Benjamin is glad she didn’t give up on her dream. “If you are passionate about something, the doors will open — even if it’s not the door you had planned.”