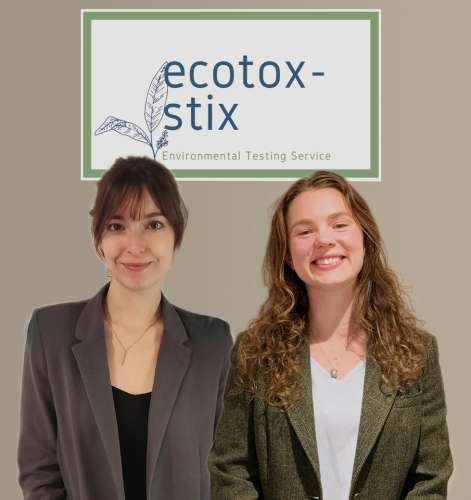 Two University of Guelph graduate students captured top prize at the Proteus Innovation Competition, a contest that aims to move technology from academia to the marketplace.

Competitors were given from January to April to develop a viable commercialization strategy for patented technologies submitted by partner universities. They then had to pitch their strategy to a panel of experts and a live audience.

Teammates Rebecca Bradley and Brooke Rathie, both master’s students in U of G’s biotechnology program, won the $5,000 first prize for developing the business plan for the Ecotox-stix. Winners were announced this month.

A second U of G team of graduate students were finalists in the competition.

The winning duo created a business plan for a simple, affordable biological using seeds and a plastic tube to determine whether water in wetlands is contaminated.

Six universities, including U of G, provided competitors access to a variety of innovations for which to develop business plans. The technology chosen by the winning U of G team was developed by Dr. Kevin Stevens of Wilfrid Laurier University in Waterloo, Ont.

The plan included developing an online environmental testing service to go with the kits. This type of testing is often costly, labour-intensive, slow and cumbersome because samples have to be brought to a laboratory. Having an online testing service solves these problems.

The best way to add value, said Bradley, “was to associate it with an internet user interface.”

The team projected business revenues of $2.5 million, including labour, on sales of the first 10,000 units, with kits priced at $300 each.

A second team of U of G biotechnology graduate students selected technology submitted by U of G. Developed by Dr. Jamie Burr, Department of Human Health and Nutritional Sciences, the technology is a portable device that combines blood flow restriction with electrical muscle stimulation to help with muscle building and recovery. The device is intended for use in hospitals or for people who are unable to exercise.

“All of us are from a science background – so we took the theory we learned in class about business tools and applied it in a more practical way during this competition,” said Patel. “It was interesting to learn about all the different aspects entrepreneurs need to know – from market research to talking to industry professionals to how to develop a business plan.”

They projected that the device, priced at $10,000 a unit, would generate $1.2 million in revenues from the hospital sector.

Steve De Brabandere, director of technology transfer and industry liaison, said this was the first year U of G’s Research Innovation Office participated in the competition.