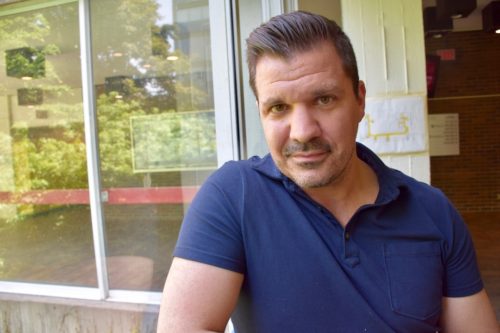 The self-inflicted scars on Prof. Stephen Lewis’s body do not define him. They record a time in his life when he was overwhelmed by depression and anxiety but found a way out through inner strength, courage and the help of others.

Since then, the University of Guelph psychology professor has dedicated his career and his life to helping those who suffer with mental health challenges.

Talking about the abuse and bullying he experienced as a youngster was essential to Lewis’s healing. As a teenager and then at university, he found self-injury provided a measure of relief from debilitating thoughts of worthlessness and shame and the intense, dark feelings rooted in that childhood trauma.

“It was never just one thing that led to the self-injury and the depression,” he said. “In many ways, it was a product of keeping a lot of things inside for such a long time.”

He is not ashamed of his scars. He says they represent fortitude for having persevered through misery and adversity. Cutting offered an outlet for the pain of shame, his feeling of being unsafe and his fear of being alone, hurt again, or rejected or misunderstood.

Sadness, anxiety and other difficult emotional experiences are unavoidable parts of life, he said. Lewis had to overcome an agonizing and persistent sense of worthlessness and disgust, and a deep-seated feeling that something was wrong with him.

“For people who have experienced sexual, physical or emotional trauma, it is especially difficult to reach out and to be vulnerable,” Lewis said. “There is an unfortunate perception that vulnerability equates to weakness. I came to learn that vulnerability is the antithesis of weakness. Vulnerability epitomizes strength. I didn’t know that for the longest time.”

Lewis’s research focuses on non-suicidal self-injury and related mental health difficulties experienced by young adults. Noted for using the Internet as a research platform and outreach tool, he is a co-founder of Self-injury Outreach and Support, a non-profit outreach initiative that provides information and resources to those who self-injure.

In 2015, Lewis made part of his story public in a TEDx talk called “Skeletons in my Closet.” He wanted to share his experiences with others who have self-injured or suffered from depression, anxiety or trauma to show them that they were not alone, that there was hope and that life can get better.

What helped Lewis get better?

“Part of it was allowing myself to be vulnerable and to feel the pain I harboured inside for so long, the agony I hid from the world,” he said. “This allowed me to process and really understand a lot of what had happened, but to do so without a lens of self-blame and shame. Having people respond to me in a way that validated my experiences allowed for vulnerability to serve as an impetus for change.

“Going to therapy regularly has also been essential in my journey. It’s a journey that continues. Recovery is not a linear path with a finite ending. Rather, it is a process, one in which meaning, resilience and purpose can be cultivated.”

Besides exercising regularly and writing down his thoughts and feelings, he cultivated friendships and relationships that ultimately lessened his sense of suffering alone.

On university campuses, Lewis said, signs of stress and more frequent disclosures of difficulty indicate that many students struggle with their mental well-being.  “My colleagues here at U of G and around the world report high levels of student stress, depression and anxiety.”

He said anti-stigma initiatives and more resources are needed to address mental health concerns among young people, especially those making the transition to university.

A survey of Ontario university students by the American College Health Association between 2013 and 2016 found anxiety, depression and suicide attempts had all increased by roughly half.

Stigma often leads those with mental health challenges to mask their experiences, Lewis said, making the problem worse. “It can lead to internalized stigma and a sense that others may not understand. It’s a complex problem that necessitates a multi-pronged and layered solution.

“There is not enough taught in schools about mental health literacy and coping skills that help young people learn what to do when they are stressed – how you experience it, how you manage it and get through it. We also need more efforts to combat stigma, promote help-seeking, and to ensure we empower and instill hope in people with lived experience.”

The University of Guelph offers a growing number of resources for people with mental health issues, he added.

“I think the University has recognized in the past few years that there is a real and pressing need to meet the mental health needs of students. With some of the initiatives that are under way, a lot of the dialogue that has been fostered is working to address that. Important in this process are the voices of students.”

Here is a list of those on-campus resources for those who want to seek help.