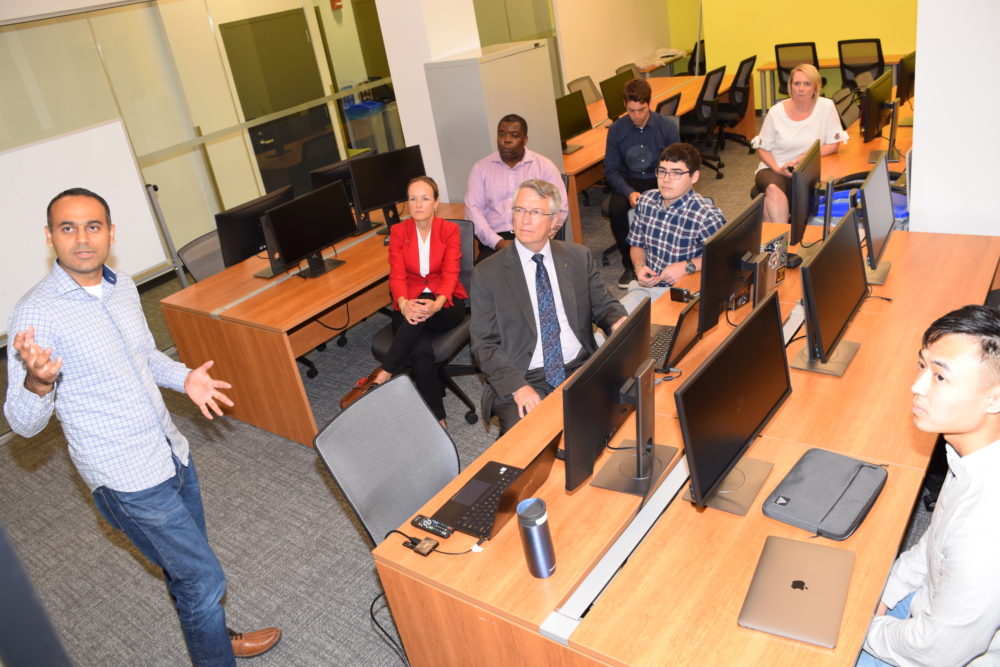 Hassan Khan, left, describes his research team’s work to Guelph MP Lloyd Longfield in the newly renovated Reynolds Building on the U of G campus.

The University of Guelph has received nearly $15 million from the Natural Sciences and Engineering Research Council (NSERC) for 60 researchers across campus whose studies have potential applications in everything from human and animal health to food production to environmental protection.

The funding is part of a federal investment worth more than $588 million provided this spring through NSERC’s Discovery Grants. The awards will go to more than 4,800 researchers and students across Canada.

In all, U of G received funding for 60 researchers in five colleges and numerous departments. Most projects will be supported for five years. The funding includes support for graduate scholarships and Research Tools and Instrument grants.

“The recognition of research excellence through these NSERC awards demonstrates the breadth of expertise here at the University of Guelph,” said Malcolm Campbell, vice-president (research).

“From machine learning to food quality and safety to drinking water protection, University of Guelph researchers across campus will make fundamentally important discoveries that will fuel innovations to improve life.”

Lloyd Longfield, MP for Guelph, added, “It is great to see the discovery accelerator funding being applied to research to keep Canadians secure from cyber threats using artificial intelligence technology, particularly with the use of mobile devices and cameras. The Government of Canada investments are helping to attract global talent in a high-growth area for the University of Guelph campus with the newly renovated computer lab facilities. Enrolment is spiking, and ideas are helping us to build digital trust together.”

Among a range of NSERC-supported projects, computer science professor Hassan Khan will receive funding to investigate ways to use artificial intelligence (AI) to improve smartphone security. 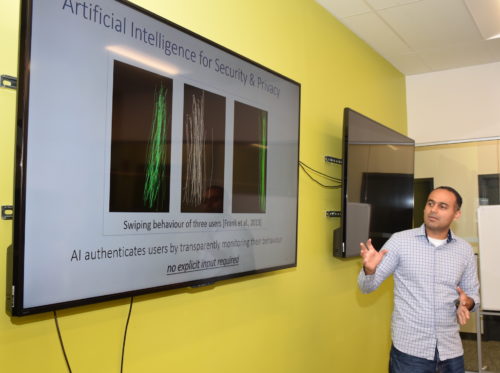 His award is among several new grants under this NSERC funding round for U of G computer scientists and engineers studying aspects of machine learning and cybersecurity.

Khan aims to improve tools for detecting and preventing fraud and protecting users’ information. Even as more and more transactions worldwide occur on mobile phones, he said, threats of fraud and information theft are growing.

Referring to people selling used phones without removing personal information from the devices, he said, “People don’t understand that there are tools to reveal data that they had deleted on their phones. There’s a gap in user understanding of threats and how best to protect against them.”

He’s also working with companies developing AI-enabled systems to thwart misuse of devices. Those systems “remember” and recognize a user’s characteristics including how someone typically swipes the screen.

Smarter phones may also be trained to recognize suspect credit card transactions based on user traits.

Called behavioural biometrics (based on biological and physiological behaviour), the field is expected to grow by 17 per cent between 2018 and 2023. Annual biometric transaction revenue will increase to $18 billion in 2022 from $474 million in 2017.

Khan is also interested in thwarting attacks on these systems, including using ultrasonic signals that track a phone user’s movements and detect whether someone else is attempting to use the phone.

He will teach in U of G’s new master’s program in cybersecurity beginning this fall.