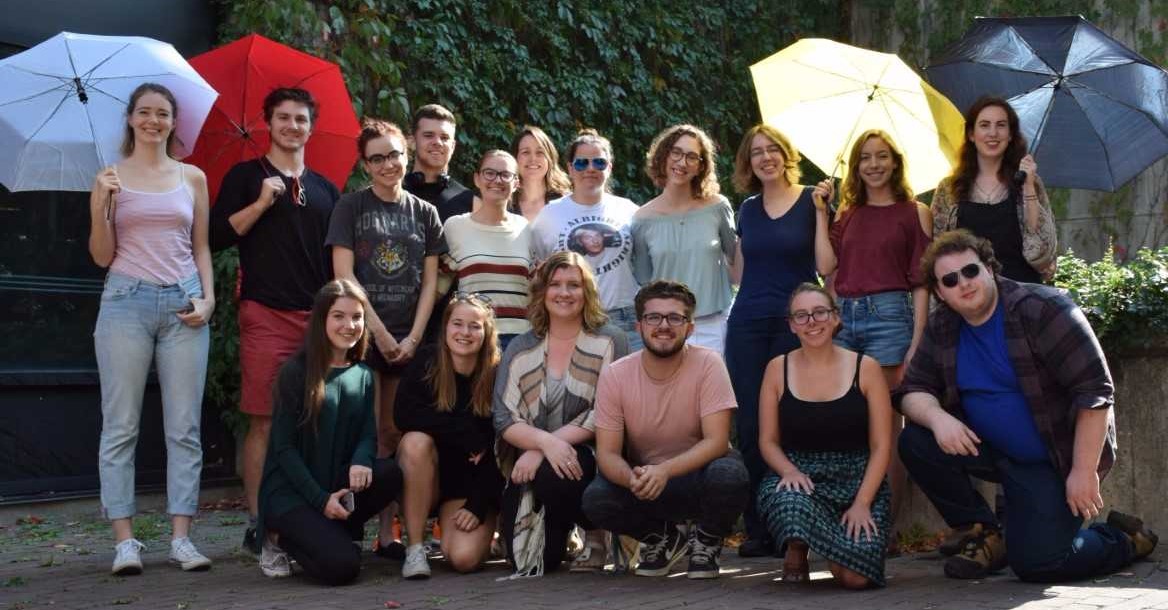 IN UNITY, organized by the students pictured above, will involve hundreds of people holding coloured umbrellas to form a human medicine wheel.

Students in a University of Guelph history class, who say they stand as allies with missing and murdered Indigenous women and girls in Canada, are helping to plan a large-scale awareness-building project on Oct. 19. They want members of the U of G community to participate.

Members of a third-year class taught by history professor Brittany Luby will combine their historical knowledge with social media savvy and organizational and creative skills in the project, called IN UNITY.

“A lot of the intent behind it is raising awareness about the missing and murdered Indigenous women of Canada, as well as showing that we stand against this injustice,” says student Roy Rebelo.

The project’s centrepiece will consist of a human medicine wheel to be assembled on campus, with hundreds of people holding red, yellow, black and white umbrellas. The colours variously represent the four directions in many Indigenous belief systems.

Organizers hope to attract about 600 participants to Alumni Stadium to hold umbrellas for the human medicine wheel. It is possible, says Luby, for up to 1,181 people to stand in the aerial photograph.

“Taking this class and learning more on this topic has opened my eyes to the fact that missing and murdered Indigenous women and girls is a Canadian issue, not just an Indigenous issue,” says student Emma Stelter. “It has motivated me to literally take a stand against injustice.”

IN UNITY participants will assemble in Alumni Stadium between noon and 2 p.m. on Oct. 19. The human medicine wheel will be photographed from above. A subsequent exhibition will display photographs of up to 1,181 individuals, each showing support for the IN UNITY project. Exhibit details will be announced at a later date.

Student Madeleine McDougall says “shadow figures, like paper women,” will accompany the photographs, as a way to demonstrate that for every missing or murdered person officially recorded, Indigenous community members suggest there may be at least one who is not recorded. IN UNITY will have a broad social media presence on Facebook, Instagram and Twitter. Visit the Eventbrite page to register.

“I’ve always been kind of aware of Indigenous issues, but they have been in the background of my life,” says student Emma Thomas. “This helps bring it to the foreground, and allows me to actually help do something about it, and educate myself.”

The National Inquiry into Missing and Murdered Indigenous Women and Girls, launched a year ago, is holding hearings across the country this fall. The inquiry will examine and report on the causes of all forms of violence against Indigenous women and girls in Canada.