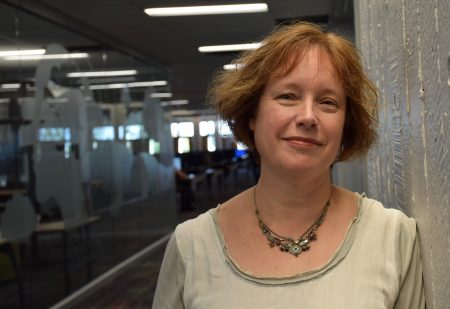 A University of Guelph professor known as a pioneer in digital humanities scholarship has received $456,000 from the federal government to further her groundbreaking digital infrastructure development.

Susan Brown, a professor in the School of English and Theatre Studies and Canada Research Chair in Collaborative Digital Scholarship, was awarded the funding from CANARIE to expand and enhance the Canadian Writing Research Collaboratory (CWRC).

The CWRC, developed by Brown, is a repository of research on a wide range of subjects in the humanities. It contains more than 250,000 digital texts, bibliographical records and multimedia components, all easily searchable.

CWRC is an open-source platform, accessible to all, which allows scholars to build on each other’s work in a dynamic research environment, says Brown.

The initiative, which involves more than 100 scholars from across Canada, received initial funding from the Canada Foundation for Innovation about a decade ago, and was officially launched a year ago.

Brown was among the first to promote using computer hardware and software as a research tool in the humanities. More than 20 years ago, she co-created Orlando as a digital platform for the study of women’s writing in the British Isles, from beginning to present.

“The CWRC work is definitely an evolution of Orlando,” Brown says. “To do the kind of collaborative work that we pioneered with Orlando, we had to develop a back-end system that managed the interactions between people.”

She explains that when many people are working with the same materials, digital checks and balances are needed in the software to ensure the integrity of those materials. Orlando featured early versions of those capabilities. She describes CWRC as a “scaling up and branching out” of that initial project.

“The CWRC grew out of the need to move to a more robust environment,” she says, adding that a growing number of researchers were eager to work with an Orlando-like platform.

“The other motivating factor behind CWRC was that we wanted to give people access to the same infrastructure, where other researchers could come and host their investigations, get access to the tools, expertise and guidance around best practices in digital scholarship,” she says.

The technology helps researchers by making a flood of information more navigable, while more readily enabling research partnerships, she says.

Founded in 1993, CANARIE supports the development and delivery of digital infrastructure. The network is funded mostly by the Government of Canada. Scott Henwood, CANARIE’s director, research software, said the funding stimulates the use of advanced software while promoting the reuse of software, freeing up more funding for research itself.

Brown’s project was among five digital infrastructure projects that received $2 million in support this week.

“This is wonderful and immensely well-deserved recognition for professor Brown, and the CWRC platform,” says Malcolm Campbell, U of G’s vice-president (research). “Her research has helped preserve cultural heritage and diversity, and is a model for creating digital environments that promote multidisciplinary collaborations. The support that she has secured from CANARIE for CWRC will help make inroads in understanding the fabric of human cultural expression, and thereby improve life.”