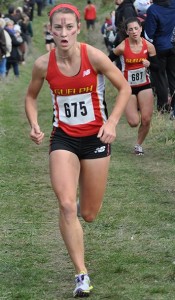 Geneviève Lalonde won’t bring an Olympic medal back to Canada, but that doesn’t matter to the residents of Ulukhaktok, Northwest Territories. Lalonde, a University of Guelph master’s student in geography and former Gryphon varsity team member, finished 16th in the 3,000-metre steeplechase event in Rio this week. She studies Inuit education, so she travels to Ulukhaktok annually. According to a CBC article, the people of the small Arctic hamlet, some 12,000 kilometres away from Rio, gathered to root for Lalonde. Residents told CBC that Lalonde, who won a bronze medal at the 2015 Pan American Games, was “very well-liked and easy to get along with.”