The bigger the brain, the higher up the food chain a fish is, according to a new study from the University of Guelph.

The study looked at fish food webs in Lake Huron’s Big Sound Bay near Parry Sound, Ont. The researchers caught and analyzed about 300 fish from 16 species. 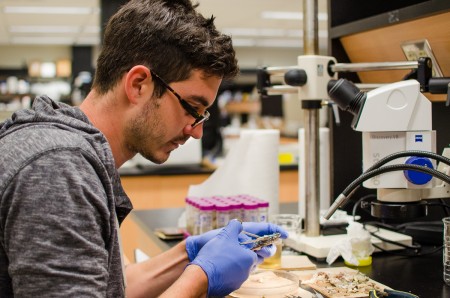 “We wanted to analyze habitat coupling, meaning we were looking at which fish can move between near-shore and off-shore,” said Prof. Kevin McCann, Integrative Biology, and a co-author of the study.

“Smart organisms that are mobile can help maintain ecosystem stability. The fish that operate in both areas ate higher up the food chain.”

Researchers had thought brain size might play a role in food webs, but they lacked data to support the theory.

In this study, master’s student Nicholas Edmunds and other researchers analyzed stable isotopes to see what fish ate, and studied fishes’ brain size.

They found that species with larger brains moved around and ate larger prey than smaller-brained species.

Within a single species, fish that moved between in-shore and off-shore and ate larger prey had larger brains than those sticking to one area and eating smaller prey.

“Being able to live in multiple habitats may require an increased cognitive capacity,” said integrative biology professor Fred Laberge, a co-author of the study and an expert in the neurobiology of amphibians and fish.

“Those fish that couple more have mechanisms that allow them to sustain themselves in different environments, and it looks like the brain plays a key role in this.”

The study is the first to look at the role of brain size in a food web.

Being able to respond rapidly to changing resource conditions is integral to stabilizing food webs, the researchers say.

“Incorporating cognition into how we think about food webs can help us understand how individuals and populations will respond in the face of changing conditions in the future,” the paper concludes.

The study is published in the June issue of Ecology Letters.

The same research group found that the size of different brains regions, known to underlie distinct functions, is also associated with food web variables in a pattern suggesting trade-offs among the relative sizes of the different parts of the brain. This second study is published in the June issue of Brain, Behavior and Evolution.