A University of Guelph mathematics professor will join the Perimeter Institute for Theoretical Physics (PI) in Waterloo, Ont., as a visiting fellow. 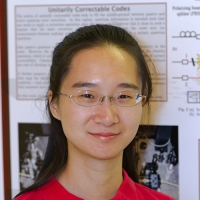 Prof. Bei Zeng, who studies quantum entanglement and quantum information theory in the Department of Mathematics and Statistics, was named one of this year’s Emmy Noether Visiting Fellows. The program supports early-career female scientists at PI for up to a year.

Zeng, who already works with physicists at the Perimeter, hopes the fellowship will further her studies of physical systems from information-theoretic perspectives.

“I hope to interact with more people and learn what they are working on, by talking to them often,” she said.

“I am especially interested in learning things that I am not an expert in. PI is the place that has all the experts I hope to learn from.”