A team of University of Guelph students has won second place in an international food development competition. 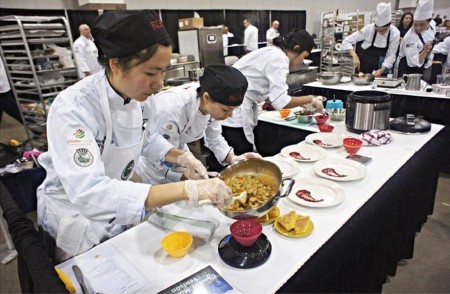 Student teams had to develop a retail frozen, single-serve, microwaveable meal costing less than $1.25 to commercialize.

“We received support from all the faculty members of the Food Science department,” said Chow, the team’s leader.

“They were all happy to share their expertise whether about packaging or meat or anything in general.”

Entries required a Rocky Mountain/Southwest regional theme and had to include pulses (beans, peas, lentils or chickpeas); 2016 is the International Year of the Pulse.

The fifth-year co-op students developed a braised venison shoulder in a reduction sauce, a potato- and lentil-based gnocchi in a southwest cream sauce, and a corn bread with raspberry compote.

“Gnocchi Mountain Venison” took months to develop, including changes to ensure the dish maintained its quality after microwaving.

“It seemed like we made hundreds of versions of our product, but in the end, our product was delicious because we had a balance of flavours and textures,” said Chow.

The team will donate part of the $1,500 prize to next year’s U of G team, which will compete in Puerto Rico.