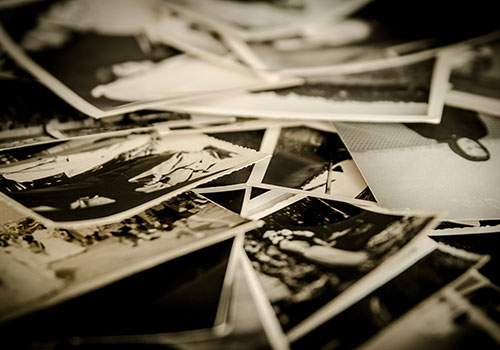 Those same impulses existed in the 1600s and 1700s, when many people kept “commonplace books” which were usually indexed and structured collections of quotes and memorable excerpts from published books. By the 1800s, they began to give way to other less-structured types of albums: scrapbooks, autograph books and eventually photo albums — another way to share images, experiences and ideas.

The older ways of collecting materials haven’t disappeared, but they have changed. “Scrapbooking today is often associated with women,” says history professor Kevin James, who traveled to St Andrews, Scotland, earlier this year to study the university’s collection of albums from the 1800s. “But I found almost as many from the 1800s that were done by men as by women.”

James’ previous research focused on Scottish hotel visitors’ books; he is enjoying this move into new territory. “These albums are very personal in some ways, but many were created to be shared. Some, for example, consist mostly of photos of the person who created them, along with correspondence with famous people and newspaper clippings of the creator’s successes.”

He’s received funding from a St Andrews Library Special Collections Visiting Scholarship and a Strathmartine Trust Award. He will head to the University of Texas at Austin next year to take up a Research Fellowship in the Humanities at the Harry Ransom Center.

James originally thought the commonplace book was displaced by albums during this time period, but realized during his research that in fact both types continued into the 1900s. Both reveal much about the interests and everyday lives of people during this time period. St Andrews is well known as the birthplace of golf, and James found albums focused primarily on golf.

Another set of albums was created by a woman who wanted to honour her brother: it included records of his accomplishments, awards, correspondence, and in the last album, of his death. Many more albums are seemingly miscellaneous collections, but James points out that each piece added to the album had meaning and purpose to the person creating the book.

Although we have more opportunities for self-expression today, James says that even in the 1800s there was much discussion about “the origins of this insatiable desire to write.” Perhaps, he suggests, the first albums — and the predecessors of social media — were the drawings on cave walls, a permanent record left behind for others to see.