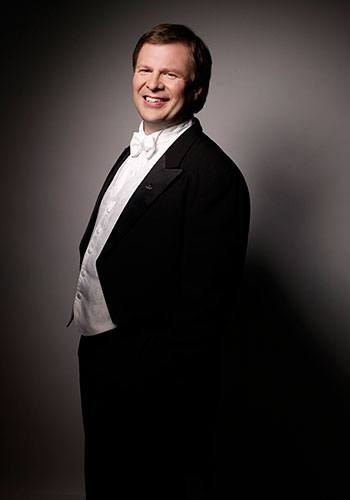 His Aggie friends weren’t too impressed.

By fall of 1978, Kevin McMillan was in his second year of an animal science major at the University of Guelph. His classmates had named him president of the Class of 1981 and College Royal celebrant.

Then came winter 1979 and McMillan had changed direction. Now planning to become a professional singer, he plunged into courses in opera history and introductory acting and conducting.

“That didn’t go over very well with my colleagues in OAC ’81,” he says. “I was the leader of OAC ’81 and then I was an Artsy. I was running Aggie pubs and then I was taking voice lessons.”

That change led to a career that has spanned more than 25 years and more than 750 concerts, a Grammy award, numerous Juno award nominations and 15 professional recordings.

This weekend, McMillan will return to Guelph as the baritone soloist in a performance of Carl Orff’s Carmina Burana along with the U of G choirs and the Guelph Chamber Choir (GCC). The concert will take place Nov. 7 at the River Run Centre.

For McMillan, the event will be a homecoming, including a chance to reconnect with two local musicians.

He began singing with the University choir in his first year in 1977.

McMillan had sung in church and school choirs at home near Listowel, Ont. “It was always going to be an avocation,” says McMillan, speaking over the phone last month from Baltimore, where he was adjudicating singers.

He planned to return home to run the family dairy farm in Elma Township after graduation. “Dad was hanging on to the dairy herd for me.”

Besides belonging to the University choir, he made the Ontario Youth Choir and sang at a gala performance at the Stratford Festival. Returning to his studies after that was difficult.

“All of my peers were going back to study music at universities across the province. I was going back to microbiology and biophysics. ”

That fall he returned home to tell his parents that he had decided to turn avocation into vocation. Not only that, but he decided to switch schools. After completing two years at Guelph, he moved to Western University. He finished his music degree there and went on to New York’s Juilliard School of Music.

It was during his first year at Western that a farm accident nearly derailed his plans.

Back home from school for Christmas holidays, McMillan was up in the barn silo one day when he fell through a trapdoor and plummeted 25 feet to the concrete floor. The fall shattered a vertebra in his lower spine.

He spent almost four months in hospital. The fall severed some nerves and bruised others, leaving him for the first month and a half with no feeling below the waist.

Enough nerves healed that he was able to move his upper thigh muscles. Since then, he has relied on crutches to get around. During concerts he uses a single crutch on stage.

Today he teaches voice at James Madison University in Harrisonburg, Virginia. He landed that job seven years ago. Before that he held an adjunct position for 10 years in the Faculty of Music at Western University.

He and his wife — also a faculty member at James Madison — have a summer home in Stratford, Ont.

In 1978, he was in his second year with the U of G choir when Gerald Neufeld arrived to lead the chorus. Neufeld now teaches in the Faculty of Music at Western University and has been longtime director of the Guelph Chamber Choir. This year, he arranged for McMillan to perform in Carmina this weekend to kick off the GCC’s 35th season.

McMillan sang Carmina with the GCC for the opening of the River Run Centre in 1997. He’s sung the part hundreds of times.

For Prof. Marta McCarthy, School of Fine Art and Music, this weekend also marks a reunion with McMillan. She has led the U of G choirs since arriving in Guelph in 1995.

Five years earlier, she was a grad student and member of the 150-voice Westminster College Choir in Princeton, New Jersey.

That fall the choir was scheduled to sing Mendelssohn’s Elijah oratorio at Lincoln Center in New York with the New York Philharmonic, conducted by Leonard Bernstein.

Three of the four top-flight soloists cancelled their appearance, and plans to record the concert fell through. It looked as though the event would be called off.

“All of a sudden, there were these two Canadian soloists,” says McCarthy. “They were so elegant and magnificent soloists, and so friendly, too.”

In 1997, McMillan performed a solo concert in War Memorial Hall. “I talked to him after,” says McCarthy. Referring to his Lincoln Center appearance, she told him, “I was in that concert and will never forget your singing.”

She says she still uncovers copies of music bearing McMillan’s name and U of G choir No. 40.

Says McMillan: “Guelph is home in a lot of ways. I had very formative years there.”

And those aggrieved Aggies? “I’m sure they’ve all come around now.”