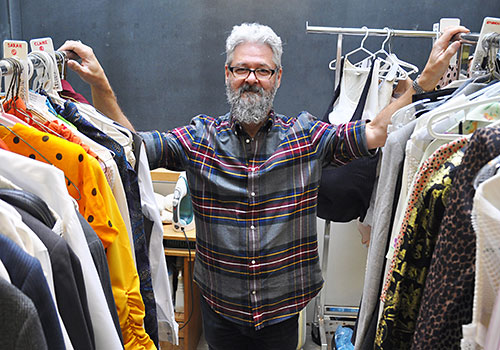 Denis Huneault-Joffre has the biggest closet on campus. That’s because he’s the wardrobe head and instructor for the costume department in the School of English and Theatre Studies (SETS). Surrounded by racks of clothing, shoes and accessories, he helps theatre faculty and students decide how characters should look on stage.

“I’ve been a designer and costumer all of my professional career,” he says. At 13, he began altering his own clothes because he wanted his jeans to be “as tight as possible.” His mother refused to take in his jeans, so he decided to do it himself. Not knowing how to sew, he almost destroyed his mother’s sewing machine, which prompted her to teach him how to use it.

His formal training included apprenticing with an alterations tailor and studying fashion design at the Richard Robinson Fashion Design Academy in Ottawa.

Working in dance and theatre combined his love for performance, creativity and design. Prior to joining U of G 10 years ago, he designed clothing in the mid-’70s and costumes in the early ’80s. He was a resident designer at the Toronto Dance Theatre for 14 years and has designed costumes for 180 dance performances at top dance companies, including the National Ballet of Canada.

In the mid-’90s, he was invited to design costumes for theatre students at Humber College. “I realized that I liked working with students,” he says. He also enjoys working with SETS faculty, such as current director Alan Filewod, Judith Thompson, Sky Gilbert, Ric Knowles, Pat Flood and Gerard Smith.

The school takes a multidisciplinary approach to theatre, exposing students to all aspects of working in stage productions. “Everyone tries everything,” says Huneault-Joffre. “A student can be working as an actor one semester, hammering nails the next and sewing on buttons the semester after that.”

Many of the costumes are repurposed while others are made from scratch. Some items are purchased from used clothing stores. The school also accepts donations. Stage costumes are designed with a more intense colour palette than regular clothes, he explains, because up to 30 per cent of a costume’s detail is lost on stage.

Designing costumes is a collaborative process. Working together with faculty and students, Huneault-Joffre helps a character come to life through clothing. Much like how the clothes people wear tell others who they are, a costume conveys a character’s identity and personality. “Clothing — before you even hear a word a person has to say — helps to establish who they are,” he says.

Deciding how characters should look begins with reading the play to understand their personalities and how they think, followed by a search through the costume stock to see if any items would work. Researching the time period in which the play is set also reveals what people wore back then.

Many students start with no sewing skills, and by the end of their time with Huneault-Joffre, they learn how to alter garments. He takes a modern approach to traditional home economics classes, teaching students how to sew a laptop cover instead of an apron.

Located next to the Luscombe Theatre in the MacKinnon Building, the costume department occasionally attracts non-theatre students. He chuckles as he recalls how several lost students mistakenly wander into his wardrobe looking for their physics class at the beginning of each term. He happily redirects them to the MacNaughton Building, home of physics and other sciences, but always invites them to take a costuming class with him. So far, no takers, but that hasn’t stopped him from trying.