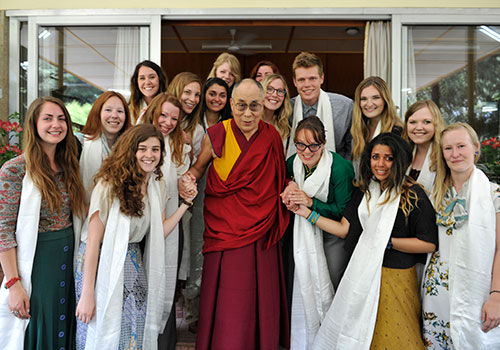 A highlight of the month-long volunteer trip to India was meeting the Dalai Lama.

People who volunteer abroad often do so with good intentions, but the results of their efforts may not be what they expected due to the complexities they encounter in a foreign country. That was one of the lessons students learned in political science professor Andrea Parras’ class. They recently returned from a month-long service learning trip to India in May.

Parras has a personal connection to Dharamsala, India, where she met her husband. “I thought it would be an ideal place to bring Guelph students to the community,” she says, referring to the large number of nongovernmental organizations that work in the area.

After approaching her department chair and the Centre for International Programs at U of G, Parras received their stamp of approval to offer a course on volunteering abroad. “It turned out they were looking for something exactly like what I was proposing,” says Parras. “It was the easiest thing to put together because everyone was so supportive of the idea.”

In fall 2014, she taught a course called “Ethics of International Experiential Learning,” which examined the pros and cons of short-term volunteer trips, and the pressure that universities face in offering these types of learning opportunities. Students also feel pressure from employers to have international experience on their resumés, she says.

In the course, students were asked to look at the potential problems that could arise for volunteers and the people they’re trying to help. “If we want to have an experience that maximizes the benefits for both the students and the local partner, what are some of the things that we need to think about before we actually go to a place and volunteer?” says Parras.

The students documented their experiences in India on a blog. They often needed to change their volunteer objectives once they realized their placements were not what they expected, she says.

Two students, for example, volunteered with a sexual health and substance abuse program, but found their safe-sex approach clashed with the local staff’s abstinence-only mandate.

Another pair of students volunteered to teach schoolchildren about environmental issues, but were asked to teach them English instead at the teacher’s request. “This is a common problem for many volunteer placements,” says Parras. “It turned into an opportunity for students to learn about the challenges within the Indian education system,” such as poverty and lack of resources.

The U of G students also helped with a street clean-up initiative. “People just throw out everything into the streets,” says Parras, since the area lacks sufficient waste collection services. After collecting several bags of garbage, the students were told to leave them in the street because the local dump couldn’t handle the extra waste. What started out as an anti-littering activity turned into a lesson about the government’s role in providing public services, she says.

Meeting the Dalai Lama was one of the highlights of the trip.

“It’s one thing to learn about human rights and the conditions in various countries in the classroom, but students get a completely different and far richer perspective when they can visit those countries, work side by side with the people who are on the front line, and share the insights and experiences of those people,” says Prof. Byron Sheldrick, chair of the Department of Political Science. “Without opportunities like this, it is highly unlikely that students would be able to meet someone of the stature of the Dali Lama. For the students on this field course, it will likely be both a highlight of their university career, but something they will carry with them long into the future.”